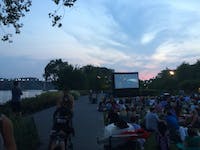 I spent this past Tuesday, July 7 night sitting on a knot of a tree at Georgetown's Waterfront Park. Only a few feet to my left was the beautiful Potomac River, which really becomes a sight when the day winds down and the water calms from lack of boat traffic. Beyond the river, the views of the Key Bridge and the Arlington Skyline are illuminated by lights. Beyond them is the fading sun which gives the Sunset Cinema Series event its name.

To my right was the largest mass of people I've ever seen gathered at the park, rivaling the volume sunbathers on perfect spring afternoons. We were here for Georgetown's annual Sunset Cinema Series. For five straight weeks during the summer, the waterfront projects a different movie for anyone, free of admission, and any passerby can sit on the grass and watch. This nod to the communal tradition of the movies, in which everyone sits in the dark together, was given another layer with this summer line-up’s theme: A Georgetown backdrop.

On Tuesday, I saw St. Elmo's Fire, the quintessential Brat Pack film (this is only a half-compliment), which is celebrating its 30th anniversary this year. A story about seven recent Georgetown University grads trying to land on their feet after graduation sounds surprisingly ahead of its time, a predecessor to the tall wave of aimless post-grad character studies of the indie movement of the '90s (Kicking and Screaming) and mumblecore films by millennials (Tiny Furniture). Where their lives go is truly the product of the Washington setting: political aide, club musician, "fluff" newswriter. In the first act, there is a brief montage of highly recognizable location shots of the C&O canal, the Key Bridge, and shops on Wisconsin Avenue. The crowd loved it; the cheering at the end of the film was the most I've heard at a teen movie since Josh kissed Cher at the end of Clueless.

The relationship between the neighborhood and the movies added some value, as if the movies leave the screen and continue to surround you. On my way to Georgetown I drove past the iconic "Exorcist Steps" and walking back to my car later, I noticed the bar used as exteriors of the fictional St. Elmo's Bar in Tuesday's movie.

St. Elmo's Fire is the movie for which the term "Brat Pack" was actually coined, though it has since been applied to earlier ones. This group of young actors that took over Hollywood in the 1980s centers primarily around the stars of St. Elmo's Fire, Emilio Estevez, Rob Lowe and Judd Nelson, and includes its other leads Demi Moore, Ally Sheedy, Andrew McCarthy, Andie McDowell and Mare Winningham. Whether you're already familiar with the Brat Pack or not, you hear those names and you know what the other movies and other stars are. There's The Breakfast Club and Pretty in Pink, The Outsiders and Some Kind of Wonderful. But St. Elmo's Fire feels different. It is not focused on romantic relationships and refuses to tie a neat bow on the ones it features. It uses the size of its ensemble to address a variety of topics, all relating to the idea of quarter-life misdirection, such as depression and the brink of poverty. It's about friends and getting by both because of and in spite of the same friends. A crucial moment in the film for me is when Alex, angry at Billy for losing the job Alex had recommended him for, shoves Billy's head in a toilet and lectures him about responsibilities. After a few minutes of heated argument, Billy makes a joke, the group of friends does its signature handshake, and they go back to having a blast at the bar. Friendship in St. Elmo's Fire can survive anything because tough love is a part of friendship.

This week, Sunset Cinema will show State of Play, a mystery-thriller set in the world of Washington politics. Russell Crowe plays a journalist who digs deep into an investigation of the death of a Congressman’s (Ben Affleck) mistress. It is influenced by a post-9/11 conspiracy narrative, understanding that the level of trust by the audience is low and that a surveillance culture is not so far fetched, and by neo-noir thrillers of the 1970s, where nothing is quite as it seems, especially when it all takes place in the shadows. If for nothing else, I believe this film to be a cornerstone of Affleck's on-screen career. Around this time he was coming off of his first behind-the-camera success with Gone Baby Gone, and State of Play gave him a chance to escape the purgatory of rom-com he had been drowning in, as well as embrace his acting persona as a charming brute.

Next will be what Sunset Cinema's webpage calls "No Way Out," but since there are at least two movies named that, it seemed to me to lack originality. I'm going to assume it is the 1987 espionage thriller starring Gene Hackman and Kevin Costner that completely embraces its late-Cold War timing. Another high-politics thriller, No Way Out is about the discovery that a Soviet spy has worked his way into the Washington inner-circle, and the government's secret hunt to smoke him out.

Following that, on the last Tuesday of July, the Coen Brothers' own darkly comedic espionage flick Burn After Reading will be screened, which earned massive critical and awards success in 2008, earning a nomination for the Golden Globe for Best Picture (Comedy), among others. It is an ensemble film with every major star you can think of, from Tilda Swinton to Brad Pitt to Matt Damon to Frances McDormand. This completes the Washington circle, really. The first four films of the Sunset Cinema series are about ambitious young professionals, Congressional reporting, high-stakes politics, and the intelligence bureaucracy. What's left, really? Oh right, those iconic stairs.

The final film of the series will play on August 4th, and is William Friedkin's New Hollywood horror masterpiece The Exorcist. The setting in The Exorcist is unmistakable. One prominent character is a jesuit priest and psychology professor, which is uniquely GU. The film's most famous (printable) line establishes the location with the utmost clarity. Describing a man whose neck was broken tumbling down the step, a detective says, "By the time he reached M Street, his head was turned completely around." The novelist and self-adapting screenwriter of The Exorcist was William Peter Blatty, a Georgetown graduate. The consensus choice for best horror film of all time and best Washington-set film of all time is the only way to end the series. It is a densely layered masterwork that puts modern horror, and most everything else, to shame.

The first week of Sunset Cinema was a huge success, with the lawn filled with families and countless couples. The event organizer, The Georgetown Business Improvement District, has announced that it will be bringing in a bigger screen and new speakers for the upcoming movies, which will make for more exciting screenings. I'll probably be propped up under the same tree, so I'll see you there, Tuesdays at sunset.