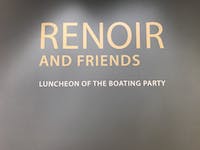 Renoir had a diverse and wide group of friends. However, the most notable people that appeared in his Luncheon at the Boating Party piece are Aline Charigot (his wife, a seamstress, and one of his favorite models), Charles Ephrussi (a wealthy art collector, critic, and editor who introduced him to wealthy clients who commissioned him for portraits), Gustave Caillebotte (his close friend and a fellow painter), and Alphonsine Fournaise (a well known model who also worked at her family's restaurant business: Maison Fournaise). Each of these key figures appeared throughout the exhibit as models in multiple pieces and, in the case of Caillebotte, included in the art showcase, since he was a painter himself.

Luncheon at the Boating Party served as a centerpiece as soon as I entered. It was massive, taking up almost an entire wall. People surrounded its borders, straining to get a good look or more often, a picture. From listening to the guide talk, I learned the painting was set at The Maison Fournaise (Alphonsine family’s restaurant) on the Seine. Renoir, as far as anyone knows, did not do any preliminary sketches before diving into the painting, but instead he revised as he went. The lively scene is punctuated by the vibrant color palette and achieves a soft yet, simultaneously detailed and high contrast appearance. Depicting a variety of people from different social classes all mingling at a luncheon, the painting creates an immediacy of the moment; it's depicted through the composition with light and movement showing people leaning towards one another intimately in conversation. I was struck most by the two figures in the left foreground of the scene: Aline (the women with the dog) and Caillebotte (in the yellow straw hat) as they appeared isolated from the rest of the group. Perhaps this reveals the significance they held in Renoir’s eyes as his closest confidants.

Using X Radiograph technology (a X-ray like machine that picks up the density of pigments) curators of the exhibit were able to show the revisions Renoir made to the luncheon painting, big and small, as he crafted it. On a smaller scale, Renoir removed and altered wine glasses within the painting, added an awning over the man with the straw hat’s head, repositioned the man with the top hat (Ephrussi) in the background and changed the head and neck orientation of the woman with men leaning over her in conversation. The center of the composition, on the other hand, went through more dramatic changes; The women holding the dog (Renoir’s wife: Aline) replaced a entirely different sitter who had been painted over.

The exhibit overall in its interactivity and thoroughness, both impressed and informed me. I would recommend anyone who has an interest in art to check it out, as it is open until January 7th, 2017; $10 well spent for the immersive experience provided.