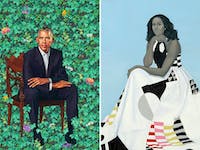 In the past, presidential portraitist: Kehinde Wiley, painted two contentious works of black women holding white women’s decapitated heads. He explained that it was a play on “kill whitey,” meant to spark discussion and provoke thought on racial issues. He wanted to show an alternative societal power dynamic between black and white people, where the black woman was strong, confident, and superior. Although jarring, these works exhibit artistic mastery. His paintings are beautiful, characterized with vibrant color use, powerful stances and facial expressions, and immense creativity. The absurdity of the whole debate is that Wiley painted an incredible number of portraits. Only two of them depicted these decapitations. He was not “known” for this type of violent, incendiary work in the first place. Their existence was drawn out to further infuriate and incite conflict.

Every president gets a portrait and sitting for a portrait requires hours of grueling effort on the part of both the artist and the model. So, why shouldn’t these portraits be unique and meaningful for both the subject and the artist? The lush greenery and symbolic flowers surrounding the former president (the official flowers of Kenya, Hawaii, and Chicago) create vibrancy and interest, and his seated position emphasizes a calm and collected demeanor. The first lady dons a geometric gown, a thoughtful expression, and a gray-scale complexion that is symbolic to the artist, all illuminated by the pastel backdrop.

If people want to say that Michelle Obama’s face is not true enough to her likeness, that is arguable. If people find the flowers surrounding Barack Obama distracting, okay. But to go as far as to criticize the artists who created said portraits, as an outlet to attack a president they did not agree with? That is shameful. There has never been a presidential portrait of a person of color before and the artists: Kehinde Wiley (Barack Obama portraitist) and Amy Sherald (Michelle Obama portraitist) wanted to make a statement. Obama’s presidency set a new precedent in American politics, so why shouldn’t his and his wife’s portraits do the same?