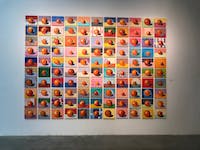 The first exhibit I encountered featured paintings by Michael Clark, who I soon learned has been an acclaimed figure in the Washington art scene for over fifty years. The exhibit combined influences of minimalism and pop-art. I could see immediately in his work the influence of the cities he splits time between: New York and D.C. Note: it wasn’t just the portraits of George Washington that gave it away, although that helped.

Clark’s paintings revealed an almost obsession with structure and precision. Many of the pieces I examined were architecturally based: paintings of buildings and windows that featured sharp lines, solid colors, and contours to create the illusion of depth. Interestingly enough, his portraits told a much different story than his landscapes, diverging totally in style. Highlighting a softer side of Clark, the portraits were less controlled and more expressive. Their visible brushstrokes adopted the pointillism style popularized by artists like Georges Seurat. Despite stylistic variations, Clark’s exhibition was held together by his use of bright, eye-catching colors and his repetition of form through shapes (lines in his landscapes, dots and curves in his portraits). My favorite piece was a large painting of oranges within gridded squares that seemed to combine all his trademark techniques.

As I wandered further in, I came across Korean born artist, Jiha Moon’s exhibit entitled: "Double Welcome, Most Everyone’s Mad Here." Aesthetically, the exhibition was executed beautifully. I loved the concept of her art, which her bio explained was meant to de-center people’s conceptions of “foreign” culture and highlight the West’s fascination with art produced by a so-called “other.” Her whimsical collages and paintings, paying homage to her roots through artistic styles and materials like calligraphy, Korean silk, and Hanji paper, also incorporated absurd and low brow Western symbols like emojis and Angry Birds. This contrast of Eastern imagery, alongside Western pop culture images, displayed how Moon defamiliarizes the familiar through her hybridized art.

I lastly wandered up the stairs to an exhibit entitled: "Entanglement" by Carol Brown Goldberg. Her work was characterized by a unique brushstroke technique that was drawing-like in its precision. Goldberg's paintings depicted sprawling scenes of dense foliage. They reminded me of intricate coloring book pages translated onto canvas. This comparison was particularly emphasized in the paintings that were devoid of color: only white canvas contrasting with the black outlines of plants. However, a variety of garden aesthetics were manifested in her work, marked by a changing use of color. Some of her paintings were black and white, others an ombre monochrome palate or fully filled in with a variety of hues. Regardless, the paintings held an ethereal, larger-than-life quality that merited contemplation.

These are just a sampling of the Spring 2018 exhibitions that Katzen has to offer. All the exhibits described, along with spotlights on print-maker: Francisco Toledo and multimedia artist: Miya Ando, and a series featuring the art of first year MFA students, are available to view until the end of May. Check them out when you have a spare moment. You won’t be disappointed.