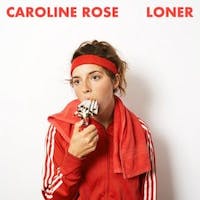 “All of this is just more of the same thing,” Caroline Rose croons on the opening track to her newest album, LONER. A track inspired by going to a party and feeling out of place, Caroline struggles to find herself in a world where the people around her give up and conform. With her sophomore effort, she cements her place with a sound much bigger and better than just “more of the same.”

Every young person knows what it’s like to stick out: it’s uncomfortable, it’s isolating, and leaves you caught between wanting to fit in and wanting to embrace your weirdness. LONER lives in that in-between space and sees Caroline Rose coming to grips with being unapologetically different in songs that can be as hysterical as they are heartbreaking. Backed by popping synth, buzzing guitars, funk-inspired bass, and the controlled pounding of drums, Caroline Rose delivers song after song bursting at the seams with pure energy. She’s larger than life on the album, criticizing a world that tells her to blend in so that she can follow her dreams.

When she slows it down on “To Die Today” and “Animal,” she does it expertly, navigating both isolation and eroticism with lyrical expertise. Caroline seems most comfortable in setting the stage for the listener to put themselves in the world of her songs, which are rife with personal experience so specific that they are instantly relatable.

Despite her raw energy, there is something about her filtered vocals that give many of the songs an engineered feel. Her performance on “Bikini” is restrained and unsatisfying given the lyrics ripping apart an establishment telling the world to put on bikinis and dance to get what they want. Ultimately, what the album struggles to embrace fully is its anger. If Caroline Rose wants listeners to dance in the face of opposition and the cookie-cutter, “straight white teeth” people of the world, she should let loose and get mad.

LONER is a solid and promising record, giving listeners a taste of what is sure to be the future of the alternative genre: irreverent lyrics, dance-able instrumentation, soulful vocals, and a downright good time. Available to stream via Apple Music, Spotify, Bandcamp from New West Records. Overall Score: 7.5/10.