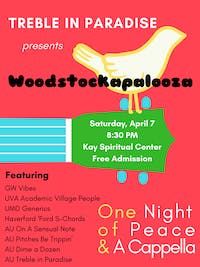 Every seat in Kay Spiritual Center was filled, people also lining the walls, eager to observe the festivities. The excitement in the air was palpable, only enhanced by the promise of music drawing on the free-spirited vibe of Woodstock. Each a capella group seemed to bring in a different emotion, the multiple three-song sets connected only by jokes from Treble in Paradise hosts: Sophie Goguichvili and Rachel November.

Treble kicked off their event, performing a high energy series of songs: Location by Khalid featuring a variety of soloists, a mashup of Havana by Camila Cabello and Hips Don’t Lie by Shakira, and closing with Dua Lipa’s girl power anthem: New Rules. The tone changed to a nostalgic silliness as The UMD Generics took the stage with a self-titled mashup: iPod Nano (Middle School) Medley. Classics such as Baby by Justin Bieber, Just the Way You Are by Bruno Mars, Teenage Dream by Katy Perry, and Need You Now by Lady Antebellum, transported audiences back to the early 2000s glory days, meriting plenty of singing along and laughs.

AU’s co-ed group: Dime a Dozen, who followed, provided a needed tone switch, bringing in more mellow songs like This is Gospel by Panic at the Disco and 715- CREEKS by Bon Iver to diversify the concert’s genre focus. Adopting a similar, pared-down style, UVA’s Academical Village People sang lesser-known, River by Leon Bridges and Mr. Blue Sky by Electric Light Orchestra. The UVA soloist’s rendition of River, full of soulful riffs, received a standing ovation by the audience.

After intermission, in an amusing spectacle, Haverford’s Ford S’Chords stormed the stage wearing white overalls. Their upbeat performance of Good Together by SHY Martin followed by Something to Believe In by Poison had a classic, playful air about it. The audience watched, rapt as one of the group’s members perfectly executed a backflip midway through the second song.

AU then returned to the stage with the all-female a capella group: Pitches Be Trippin’. I noticed the greatest tonal variation within their set; they fluctuated from the dreary pop-hit Dark Horse by Katy Perry to the soft rock acoustics of Landslide by Fleetwood Mac, and concluded with the full-bodied, charged sound of End of Time by Beyoncé. The final song was particularly well received.

In contrast with the previous act, The Georgetown Chimes was a much smaller group of only around 10 people who impressed with multiple-part harmonies. They sang polished renditions of the cheeky blues tune: 60 Minute Man by Billy Ward & The Dominoes and Louis Armstrong’s uplifting ballad: What a Wonderful World. The concert ended on a high note with AU’s final group: On A Sensual Note, who had the audience clapping and singing along to well-known selections like Accidentally in Love by The Counting Crows, Bruno Mars’ Finesse, and Gives You Hell by All-American Rejects.

Overall, Treble in Paradise delivered several fun-filled hours of music and a chance to be exposed to talented musical groups outside of the American University bubble. If you are interested in checking out a capella on campus, Treble’s Final concert: Wonks in Paradise will be taking place in Kay Spiritual Center on April 28th at 8 pm. Pitches be Trippin’ will also be holding their final concert on April 27th at 7:30 pm in Kay. You can find more information about these on-campus and visiting groups via their respective social media platforms.