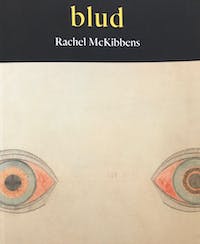 Holding Rachel McKibbens’s third poetry collection, blud, feels something like harboring an object of witchcraft or an ancient artifact. After all, it’s a book that defied all odds. During her classroom discussion at American University, McKibbens described teetering on the precipice of burning the initial manuscript of blud so as to cleanse herself of it. Yet, instead of offering it to the fire, this resilient book has made it to our very laps, with a driving voice of rhythmic, urgent, and sinewy candor. For all its incantations and mythical themes, blud seems befitting of its fateful origin story.

The book opens with the “Lavender shock / of resurrection,” a moment of re-awakening, which foreshadows the birth imagery that recurs throughout. Largely preoccupied by forms of inheritance, blud often uses the grisly yet natural imagery of birth to investigate questions of heritage, mental illness, family, and power. In “the first time,” the narrator intones:

Akin to a baby, unwrapping an umbilical cord from around its neck, the narrator toes the line between life and death. Later, in “dead radio apostle,” this shapeshifts into a dreamscape, wherein the narrator gives birth to her mother, who “shoulders through [her] pelvis” and pushes “beyond / the thickening fog of voices.” This cacophony of voices vying for space, twisting into one another, is likewise part of the heteroglossia—and the nearly contrapuntal musicality—of the work. The mother’s continuously present absence, the father, the grandfather, brother, children, abusers, and lovers all make appearances, imbricating its introspection.

Nonetheless, blud also draws from a wide range of genre influences and forms, from litanies to word riddles to fairy tales. For instance, in “For Carol, who is no one,” the narrator sings:

Why did you leave us alone with

Do you know I have five dizzy

dwarfs of my own?

The narrator then goes on to describe a “castle covered in witches” and concludes the poem with a sacrifice of the mother in a river. Embedded in a sing-song rhythm, “For Carol, who is no one” draws from fairy-tale descriptions of a witch-hag, mirrors, and dwarves. Likewise, it even seems to reverberate with echoes of Plath, especially in its blunt declamation: “Mother, you lousy walk-on. / You muddy old bitch. / I’ve become your good daughter, / I have written you a part.”

McKibbens is therefore just as much a musician as she is a poet, if the two could be argued as separable to begin with. These poems use the momentum of their musicality to push through gritty subject matter, reflect the swirling motion of mental illness, and whittle the edges of poems that seem to press sharply against the page. Considering McKibbens’s background as a slam poet, this makes perfect sense; she is a nine-time National Poetry Slam team member, the 2009 Women of the World Poetry Slam champion, and the 2011 National Underground Poetry Slam individual champion. The audible origins of her poems are especially notable in “oath (blud litany),” “letter from my heart to my brain,” and “una oración (bruja’s soliloquy).”

Perhaps most importantly, though, blud is a book about survival—an aria of perseverance, reclamation, and continuance. Over the four delineated sections, we watch this process take place, after beginning with the narrator’s metaphorical birth and ending with a poem about the narrator’s children. The beginning half of the book emphasizes childhood experiences and trauma, such as in the powerful and sprawling poem, “the ghost daughter speaks: white elephant.” Yet, by the end of section II, the tone veers towards one of purifying catharsis and forgiveness. In “oath (blud litany),” the narrator unravels this string of couplets:

Let this wild depression throw me beneath

its hooves if it brings me to you. Let me pronounce

my hoarded joy if it brings me to you.

Let my father break me again & again if it

brings me to you.

I did not see you coming. Forgive me.

Overall, the process of reading blud has felt like a healing wound that, slowly, purges the gravel from its skin—something surprisingly cleansing. For all its flesh, pain, and hauntings, it ultimately lands on the one truth: “we will go on.” Finally, that’s when I realized why this book had felt so remarkable in my hands: it had never truly escaped the fire. Instead, it had subsumed it.