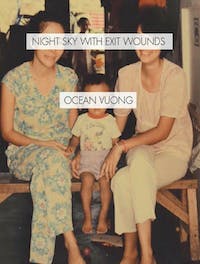 Don’t be afraid, the gunfire

is only the sound of people

trying to live a little longer

get up. The most beautiful part of your body

is where it’s headed. & remember,

Ocean Vuong’s 2016 poetry collection, Night Sky With Exit Wounds, tells the story of the immigrant working in a nail salon in New York as she learns the English alphabet. It tells the story of South Vietnam when the U.S Armed Forces evacuated in­ April of 1975, as Irving Berlin’s “White Christmas” crooned through the streets. It tells the story of the gay couple murdered in their home in Dallas in 2011. It tells his parent’s stories of the war in Vietnam, and his own stories of intimacy and immigration as a gay, Vietnamese immigrant, growing up in America. The lines, “There is so much that I want to tell you” and “There is so much that I need to tell you” repeat throughout the poems, calling the reading into Vuong’s world, echoing how sharing these stories is cathartic to Vuong.

One of the most enjoyable parts of the book for me was the different forms Vuong adapts. Some poems are succinct and land gently on the page, while others fill up the page with blocks of prose. One poem, “Seventh Circle of Earth”, about the men murdered in Dallas, is a poem only written in footnotes. The page is blank with numbers spread around it, indicating the footnotes at the bottom of the page, which reveal lines of poetry. This poem is one of the most heartbreaking in the book, and the emptiness on the page— accompanied only by numbers— reflects the weight of empty space, and how the poem is trying to make sense of it.

In the poem, “Into the Breach” Vuong leaves large spaces between each line and keeps them short, filling the page with blankness. Vuong instills the feeling of loneliness into the form by isolating the lines:

man— is to leave

I want to leave

Honestly, this poem made me cry. (And I’m not ashamed!) Vuong’s images of intimacy are simple, yet tender and heartbreaking in a way that makes it feel raw and earnest. My favorite poems have always been those that feel familiar to me, like the author is opening up a part of me that was already there. Vuong’s language itself is intimate for the reader during these moments of intimacy, because of how familiar it feels. In the poem “On Earth We’re Briefly Gorgeous” he asks, “Don’t we touch each other just to prove that we are here?”

The book starts with the lines, “In the body, where everything has a price,/ I was a beggar.” Vuong immediately separates himself from his body, and throughout the book, tries to reconcile the different parts of himself. The poems wonder: where does a gay, Vietnamese immigrant belong in the American Dream?

in towns with names

the weight of history

can bend their branches

Night Sky With Exit Wounds is an emotional journey into war, immigration, sexuality, identity, parental relationships, romance, and nostalgia. I found myself rapt by Vuong’s voice— his words are rhythmic at times and startling at others, but always measured and impactful. My favorite parts of almost all of the poems were the last lines, because of Vuong’s skill in building up to a finale. I recommend this book to anybody interested in contemporary poetry— and if you don’t want to buy a copy, a lot of his poetry is available online.

Dear god, if you are a season, let it be the one I passed through

Here. That’s all I wanted to be.