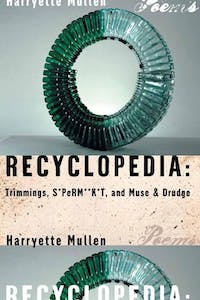 Bearing comfort in a consistent use of wordplay, Harryette Mullen explores cultural and gender societal norms and representations through the comparison of a supermarket and home setting. While her mature language and voice initially come off as intimidating to a second-year college student such as myself, she uses enough vivid imagery and reoccurring references for most to find sense in one scene or another. The title of the collection, “S*PeRM**K*T,” is a double entendre that is taken as both “supermarket” and “sperm-kit,” the former being a common stereotypical location where one could locate a mother picking groceries to satisfy a family, and the latter being a precursor to a family. Thus, not only is the language daunting but the topic itself is also difficult to follow and swallow.

It first came apparent to me that this collection wasn’t about someone shuffling mundanely down food aisles trying to find ingredients that would suffice for one -- or a group of four -- when Mullen brought pregnancy six pages into the collection, into the discussion:

Which perfectly exhibited the use of both meanings for the censored section title: supermarket and sperm-kit. It’s often found difficult to speak with such conciseness, rather it’s easier to illustrate moments and scenarios through lengthy prose (to which she actually does do in later pages), but it’s short single statements like these that both disrupt yet enhance the flow of the poem. Every couple of pages she will continue this routine, stopping amidst the plethora of words to include a portion that consists of a sentence or two, acting almost as a conclusion of what was explained within the prior pages, or a transition to what will come later. Since following the above portion, the reader goes from name brand food labels to descriptions of a woman’s monthly period compared to the meat aisle. Yet it isn’t until the next page does the reader allow themselves to delve into the nitty-gritty detail of a beloved talk on objectification:

“...Their bodies on the racks stretched taut. Honing hunger to perfect, aglow in nimbus flash. A few lean slicks, to cover a multitude, a fix for the eyes. They starve for all the things we crave” (pg 72).

If it wasn’t clear enough from the first line “their bodies on the racks stretched taut” speaks on people (most likely women as it follows the talk on women hygiene in the prior page) being put on a display, whether purposeful or not, to satisfy the viewer’s eyes and personal “cravings.” To which, in layman terms, speaks on the societal expectations of women in its most visceral context: that women are different cuts of meat waiting to be bought by the hungry male audience. They (women) are “starved” of their own satisfaction in order to appease the needs of others, that is their “purpose.” Furthermore, they, of course, should feel appreciative of all the attention they acquire. While one could take this in its most literal sense, they would be blindly missing the point of Mullen’s underlying passive aggressiveness. A common device she uses throughout the collection is the playful and familiar references to childhood rhymes (“little piggish to market” in allusion to the “this little piggy went to the market” game) and shows (“that’s all, folks” in allusion to looney tunes) that exudes mockery on what is normally spoken in stiff seriousness (pg 82).

“Plushy soft tissues off screen generic rolls as the world turns on re-vivid revival rewinds reruns recycling itself. A box of blue movie equals smurf sex. Poor peewee couldn’t shake it. Wished he had a bigger one…” (pg 78)

Aside from the alliteration (“re-vivid revival rewinds reruns recycling itself”), which is another technique that Mullen has been seen to use scattered about her work, a personal favorite line of mine from the given portion above is: “Poor peewee… Wished he had a bigger one,” a reference to Pee-wee Herman (Paul Reuben) who received justified backlash for sexual misconduct in a public space (i.e., he jerked off in an adult theatre), and a common commentary he received was mention of his penis size. It’s another instance of this sort of method that not only captivates interest with quick cleaverness but also creates balance to prevent the reader from being bogged down by the heavy implications.

Harryette Mullen perfects the art of vague metaphors in a vivid setting. Although, there are moments where the reader can often finds themselves floundering about in the allusions and questionable comparisons (I mean, to this moment I still cannot understand what she’s inferring when speaking on page 91: “They make and break and scramble to get ahead. Whisk the yokels into shape. Use their pecker order to separate the whites.”) she enforces reminders of meaning in the minimum. To end it all, she leaves with a parting statement, some advice to tell the reader to be conscious of issues within the societal system by once more reiterating the critique of society’s perspective on the purpose of women: “Speed readers skim the white space of this galaxy,” her only reference to writing and the readers themselves, calling out those that could entirely forgo the purpose of her poetry and praising those that have been able to read in between the lines, or rather “the white space.”