The Balance Beam of the Self in Tiana Clark’s Equilibrium 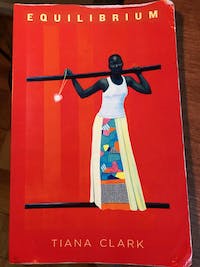 In her 2016 debut chapbook: Equilibrium, recent Vanderbilt University M.F.A. graduate, Tiana Clark, stuns readers with a raw body of work that grapples with formation of personal identity within larger historical contexts. Addressing complex themes like faith/religion, beauty, blackness, biracial identity, mental health, familial relations, poverty, and geography, Clark reveals to us the breath of her writing capabilities through experimental form and innovative content. Clark addresses her tendency toward the bold in a review in Rattle, where she says: “I find it infectious, as I start to become more reckless in my work. I write to access that blood-jet pulse—to rake my flaws across the page, sift through my past hoping to find grace, connection, empathy, power, and—most of all—honesty.”

The epigraph of the book itself: “There is always a road/… Always a question/Bigger than itself,” from United States Poet Laureate, Tracy K. Smith, tells readers that this is a collection invested in exploration and what is left unanswered.

The collection’s namesake poem navigates these in-betweens and uncertainties, conveyed through its split-line form. Content reinforces the speaker’s fragmentation in the lines: “Took me/thirty years to say/I’m glad/I don’t pass for white” and “ I thought this/is what my white/boyfriends/wanted as their hands/became/each European request.”

The use of white space, dividing the center of the poem into two parts like a border of sorts, reminds readers of the pervasiveness of whiteness and how torn the speaker feels due to her biracial body. The clipped lines that end the poem:

stopped trying……………to become the other?

convey the severed-nature of Clark’s identity, especially in the phrase “what is left?” The lineation in this section also create suspense and delay the final message of the poem. Breaking on the words “left” and “whispering,” produces a feeling of lingering that leave her thoughts echoing in our heads.

In the later poem “Flambeaux” that mirrors “Equilibrium” in its structure, Clark depicts racial strife in modern day New Orleans through a mix of high and low language. She puts her own body in the larger context of black historical experience early in the poem saying: “My arms like the arms/of black men carrying/heavy torches, and before them, the wet limbs/of shiny slaves lightning white/pleasures of dark men floating in the deep/throat of night.” Note the importance of the words Clark breaks on like “arms,” “carrying,” and “limbs” that generate heaviness, reproducing the physical weight placed on black bodies. She also emphasizes the juxtaposition between light and dark by breaking lines on the words “white” and “night.” Later Clark highlights racial tension and hypocrisy more directly, saying that the tourists partying on Bourbon Street: “want to dance/to black music but not with/black people.”

Following the opening poem, the book appears to be organized by common theme. It opens with a series of poems pertaining to childhood like “The Frequency of Goodnight,” “Hair Relaxer: An Origin Story” and “Magic,” and progresses into poems that contemplate religion and its limits, including: “Black Champagne,” “Exorcism,” and “A Psalm for The One.” It segues from there to commenting on Clark’s absent father, places of significance to her, and other poets’ work reimagined.

The religious poems Clark writes, as a collective, are highly interesting. Many of them mock the very institution of church that they describe. For example, in “Exorcism,” Clark teasingly describes devil-banishing rituals performed in church like many would describe sex with phrases like “writhed,” “her eyes… slid to the back of her head,” “flutter of eyelash,” and “excited, because we were inside the same heat.” These lines reverse our conceptions of religious ideals of abstinence by sexualizing them.

Clark continues this mocking of religious power in “A Psalm for the One.” Throughout the poem, she inserts sarcastic lines to poke fun at the figure of a godly man like: “The last email said I was just/a really good friend… a sister in Christ./Amen.” The cheeky tone of these phrases emphasize the irony behind her words. Clark also periodically describes his body and her own as religious objects like “an altar” or “a crucifix,” implying that they worship each other’s physical forms, rather than God.

Clark does genius work in her poems depicting racial injustice in the modern day by invoking the voices of other poets; in these hybrid-pieces, she creates a dialogue between differing texts that add to the richness of meaning transferred. By rewriting Dickinson’s “Because I could not stop for death,” Clark describes the death of Sandra Bland, bringing in contentious conversations about police brutality and racial profiling. In another poem: “How to Find the Center of a Circle,” Clark works within the mathematical equation of a circle to comment on racial slurs and lynching.

“Waking in the Vanderbilt Psychiatric Hospital” and “Promethea Remixed” are two of the most ambitious and innovative poems of the collection when it comes to exploring biracial identity. In “Waking in the Vanderbilt Psychiatric Hospital,” the narrator describes herself as “Locked- in spotted eggshell cage,/like vanilla/black bean speckled creme brulee,” revealing how in-between and confined she feels as a biracial women. Themes of splitting and discomfort in one’s own body continue in later lines like “double-dutch ropes cut me in half”, “the Parthenon lies just in between/my mom and dad’s histories” and “Drink me, eat me,/wash me clinical and white.” Clark’s lines break on words like “half” and “between” further signal division.

“Prometheia Remixed” draws from many authors’ writings including Robert Lowell, Shakespeare, Sylvia Plath, Nella Larson, and Lord Byron. The poem centers on Clark herself as the greek mythology figure of Prometheus (a man who was punished by the gods for stealing fire by having his innards eaten every day by vultures). The poem is divided into three sections entitled: Bound, Unbound, and Origin. Origin is perhaps the most revealing regarding Clark’s relationship with family and self identity. In it, she admits: “Every day,/I keep writing the same new scar-/begging to close,” and “Their [her parent’s] differences smashing into each other,/skin engines of self-hatred that made me.”

Tiana Clark's work has appeared in respected publications such as The New Yorker, Poetry Magazine, and American Poetry Review. She has also won notable awards including: the Pushcart Prize, the 2017 Furious Flower’s Gwendolyn Brooks Centennial Poetry Prize, and 2015 Rattle Poetry Prize. She is currently a fellow at the Wisconsin Institute of Creative Writing and teaches creative writing at Southern Illinois University at Edwardsville. Read more about her and her creative work on her website: http://www.tianaclark.com.

Equilibrium is the winner of the 2016 Frost Place Chapbook Competition. A book engaged in reassembly and call and response, it gives readers no clear answer to its inciting question. Yet, the journey of reading and re-reading Clark’s words is worth the uncertainty and imperfection. Much like the self, Equilibrium is unfinished: a balancing act that allows for moments of instability. I will undoubtedly be picking up this book again.