The Rise of Death in YA Fantasy 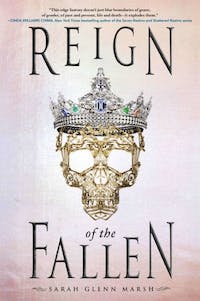 Years back, in our middle school and high school days, dystopian novels were all the rage. The Hunger Games, Divergent, and Matched stormed the shelves of every bookstore. The audience of young book lovers were obsessed with seeing authors create new worlds with governments whose systems eventually lead to its own downfall. At the same time, our own government was and still is going through major change. Our minds swirled with the questions that started with, “what if...”

Now, it seems, there is a new fascination: death.

Recently, I read the book: Reign of the Fallen by Sarah Glenn Marsh. A young woman named Odessa works as a necromancer in a kingdom where she must constantly bring the king and his royal family back from the land of the dead. The price of her magic is that necromancers such as herself cannot be brought themselves back after death. So, when Odessa’s boyfriend tragically dies early on in the story, she can only grieve him. But what is more messed up is that, because of the hefty price of necromancy, it seems that the magic is only reserved for the upper class. In addition, as the same king has been ruling for generation after generation, he refuses to change his ways. This leaves the poor dying in masses from a disease--because creating a cure means change and change is forbidden.

The book seems to suggest a few things. What I took away is that, one, it is necessary to let people go when we lose them. We have to move on for our own survival and growth. Two, death is necessary for change, as change is necessary for progress. And there are probably dozens of more meanings the reader could pick up from this fantastic tale.

What I find interesting is that, this is one of many arising books on the YA fantasy market in which death is the central theme. Other popular books include The Bone Witch by Rin Chupeco, Scythe by Neal Shusterman, and The Coldest Girl in Coldtown by Holly Black.

Why does the youth find this so intriguing? Perhaps it is in part by the presence of mental illness, namely depression, in our youth. A study by John Hopkins University found that there has been a significant rise in teen depression. One of their sources found that, a “more than 36 percent of girls in America have been or are depressed by the time they reach 17” (Sugarman). This number is shocking in itself. Does this suggest that fantasy books with the central theme of death possibly help us realize we need to keep fighting to live? Does this help teens cope with their own depression?

On the other hand, social media has certainly exacerbated the spread in news of war and crimes around the world, making death seem as though it is at our fingertips. The world has always had its fill of violence, but now social media can force it in front of our faces. Even without having a news app on your phone, we can be notified on Twitter, Facebook, or even Instagram, on crimes oceans away, such as the recent massacre which targeted and killed dozens of Muslims in New Zealand. And as teens are on social media the most, perhaps fantasy books dealing with death are simply more relevant.

Either way, it is no question that death has been put before us and we can no longer turn away. Emerging stories in YA fantasy buckle us to our chairs and force us to think about it upfront, more than before.

Perhaps this is necessary. We can appreciate the people around us more, and treat people a bit kindlier. We can offer our support to those suffering and, although death is inevitable, we can make the most of our time. And the magical qualities that fantasy literature applies makes it an easier pill to swallow.