I Don't Regret Reading 'I Might Regret This' by Abbi Jacobson: A Review 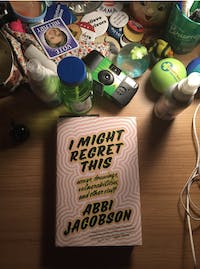 There were only a few things I wanted for Christmas. One of those things was ‘I Might Regret This: Essays, Drawings, Vulnerabilities, and Other Stuff’ by Abbi Jacobson. When Christmas morning came, this wish had come true, and despite clinging onto my youth by requesting a Christmas present from my parents, I relished in the satisfaction that came with opening up something I’ve wanted for a long time.

I could talk about a thousand things I admire about Abbi Jacobson as a writer, actress, artist, comedian, and simply just a woman, but I really came to love her through Broad City, a recently finished TV series on Comedy Central co-starring and created with Ilana Glazer. The two girls met through being a part of the famous improv group, ‘Upright Citizens Brigade’ in New York City, soon becoming not just best friends but partners in business, a business where their minds would creatively clash to create the hilarious world of Broad City.

Throughout the five seasons of their inventive, courageous, and genuine depiction of two young women in New York City, I felt appreciative for not just Abbi and Ilana’s humor, but for being real and imperfect funny women. This invaluable quality of Abbi Jacobson shines even brighter in her book, ‘I Might Regret This’.

Filled with wisdom, vulnerability, and mistakes, Jacobson tells her story through a timeline of her solo, cross country road trip she took following a break up with the first woman she’s ever been with. Through mini-essays, excerpts of late night journal entries, and some of her drawings (as she is a trained illustrator graduated from MICA- Maryland Institute College of Art), we get to understand Jacobson’s take on everyday issues, big life questions, and her experience as a gritty young woman in the comedy industry, as well as in the world.

Jacobson’s book, while it may be looked upon as another celebrity personal memoir, it is a cutting edge example of the kind of stories women need to be encouraged to tell. Jacobson, like in many other things, paves the way for women to be honest about not knowing what will come next, what the future holds, and who they are, showing that even women who’ve achieved as much as Jacobson can still not have it all figured out.

Through exploring her isolation on a cross country road trip, Jacobson shows fearlessness in her honesty through humor-- something not so easy to do. Her frank exploration of her identity, sexuality, and expectations for life show me that being honest about yourself can be not only freeing, but interesting and productive.

Watching and reading all of Jacobson’s work so far, whether it be T.V., illustration, or her book, I have felt indebted with gratitude towards her for being my funny and strong role model. I recommend her book with my highest praise as it stands as yet another piece of her work that can make you laugh, reflect, and maybe even inspire you to take a road trip of your own.