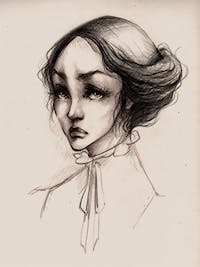 I am sure many people were forced to read Jane Eyre as a teenager, whether it be in high school English class or a college course. Most people view it as a romance novel, some hailing it as the greatest romance novel of all time. I am sure when Brontë wrote this novel in the Victorian Era, it was reasonably romantic, but in today’s standards…not so much. I see it as a comedy.

The character Jane is relatively amusing. She tells the reader constantly how she is badly treated just because she is average looking and is not of a high class. But if you read carefully, Jane is not a great person. She judges everyone based on their looks rather than getting to know them as individuals. The novel advocates for this new middle-class ideal of valuing interiority, which Jane stresses to the reader. She then uses this new model to explain why she has a strange internal connection to Mr. Rochester, yet she continues to judge others just on their looks. She sees no disconnect between appearances and the internal characteristics of an individual. It is so ironic because Jane hates the fact that people judge her based on her appearance, yet she does the same thing and then happens be right about those individuals she meets. I laugh at this. Jane is fairly hypocritical.

Mr. Rochester as a character is also humorous. He claims to love Jane because of their weird internal connection, yet he threatens her repeatedly after she decides to leave. He doesn’t get that Jane can’t stay with him because he has a WIFE in his ATTIC. He repeatedly says that it shouldn’t matter because no one knows about her, so he and Jane could still be together. Jane explains that it does matter because sheknows, but he just cannot seem to understand how it’s an issue. The novel itself is reasonably humorous because as you read, you think, who could possibly love Mr. Rochester, who is honestly horrible. He is so incredibly rude to Jane and he treats all women horribly.

The end of the novel is even funnier, as the only way that it was possible for Jane and Mr. Rochester to be together, per the rules of Victorian Era society, was if Jane could rise to the same social class as him. Which, by the way, was not really a thing, as rising to another social level was a new middle-class ideal. So, what Brontë decides is the best option, so that these two love birds can be together, is having Jane oddly inherit money from an uncle she never knew she had and then having Mr. Rochester lose his estate and become horribly deformed. Brontë had a wildly creative mind.

There is also a very humor side relationship that is formed when Jane decides to leave Mr. Rochester, because it is just too difficult to remain in his presence after the discovery of his wife. Jane meets a young clergyman who essentially saves Jane’s life after she is left outside for two whole nights. He is one of the dullest characters around, as he shows no emotion or human joy. He harbors a secret love for another girl in this tiny town but is unable to pursue his feelings. So, instead, he asks Jane if she will marry him, even though she sees him as a brother and has told him this repeatedly. They also happen to be cousins, which was relatively normal during this time. She refuses him and he cannot seem to understand why.

I will admit that the novel is beautifully written. Brontë did an excellent job in her choice of words and syntax, which leads the reader to side with Jane. She manages to get the reader to believe that Jane could do no wrong, even though we realize that Jane is not the kindest person in the world. It is quite fascinating if you examine the ways in which Jane explains past stories to the reader. She forms them in a way that elicit the perfect reaction out of the reader; she receives sympathy and not necessarily pity. It is honestly an art form that Brontë is able to achieve this. She demonstrates major talent in making so many people see Jane Eyre as one of the greatest romance stories of all time, even though the characters have some serious problems.

Even though this novel might seem like a cliché, it is honestly one of the least boring 18th-century novels out there. It is so entertaining to read, though maybe a little frustrating at times. I cannot say that it is applicable to modern times, as the story is so unique and the social culture very different from that of today. But I can say that this novel is as entertaining and amusing as any modern-day novel. A lot of classic literature, for some, tends to be boring or dull compared to modern fiction. But novels alone possess this ability to transcend time and have a story remain widely known and entertaining. Telling compelling stories is not easy, but Brontë sure makes it look easy. If I had to explain Jane Eyre to anyone in one sentence, I would simply say that it is a roller coaster.