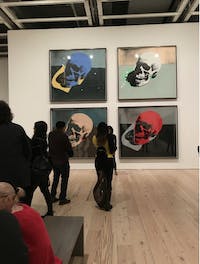 Over spring break, my family and I ventured down to The Whitney Museum of Art on the Lower West Side of Manhattan to see the new exhibit “Andy Warhol- From A to B and Back Again”. It’s a not so hidden treasure that sits on the Hudson River, below the Highline, and neighboring one of the most expensive and vibrant areas of all of Manhattan. Living just a train ride away, on the other side of the East River in Brooklyn, I had been to the Whitney before, but never seen more of Warhol than his most famous works.

Being home for spring break, it was the first time seeing Manhattan on a Saturday night in a while. Taking a crowded Q train to 14th street, we hopped on another bus which brought us down to the museum. Cobblestoned streets were packed with young people cramming into bars and Ubers. As I was walking with my mom, who was born in Queens and has lived in the city for over thirty years, she explained this is not what the meatpacking district used to look like. On one block you’d see a New York more familiar to her, one filled with everyday people closing up stores, waiting for buses, and talking at a volume that's really only normal on the streets of New York. However, the next would be crowded with people in their twenties dressed nicer than I was on prom to drop over $100 on dinner and drinks.

One block gritty and real, the next glamorous and filled with luxury.

Overall, the city isn’t afraid to stand out in its contrasting identities, and neither did Andy Warhol.

Warhol was someone who never fit into a specific category, pushing boundaries of identity and expression, and this is evident in his art. Growing up with pigment issues on his skin, he found comfort in costumes, wigs, and makeup to forge his own sense of identity. Warhol, a gay man in a less tolerant time, found a way of life through his art, crossing conventional lines of sexual identity and means of artistic articulation. I saw this through his various expressions of portraits, prints, film, repetition, and simple illustration.

Starting on the top floor of the Whitney, the walls were adorned with more than 350 works of all different mediums. Even though Warhol is an artist known for his bold and famous expression, seen in pieces like ‘Campbell's Soup Cans’, his more underestimated and sensitive works like sketches from old notebooks were displayed in the exhibit. Depictions of his personal life and struggles of identity found a place through simple and sometimes graphic expression. Images of what some would consider crude or vulgar were fearlessly portrayed through his art. He wasn’t afraid to display real life as much as he had the courage to illustrate his imagination.

It would take more than an hour-long visit to a three-floor exhibit to appreciate all of Warhol’s genius. However, what I took away from the exhibit was similar to what I picked up on while walking down the confusing, conflicting, loud streets of Manhattan. The kind of streets that mixed street performers and stock brokers. Warhol wasn’t afraid to densely contrast and surprise. Just like the scenes of New York, you can’t look away from his art, not because of its conventional beauty, but because of its memorable and colorful nature. His portraits may be the only place you would see Mick Jagger alongside the Shah of Iran or a beautiful print of flowers neighboring a distraught series of Jacqueline Kennedy prints.

This displacement of beauty and unconventional expression resonated with Warhol and New York City, placing this exhibit in the right place. So while what stood out to me may have been the beauty within Warhol’s sense of displacement, his art couldn’t have found a better home than New York.