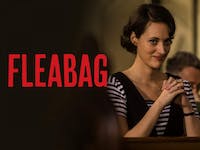 You know that feeling when you make friends with someone, and at first, it’s lighthearted— you like spending time with them because you laugh a lot together, but then you reach a point where you realize that person is going to be really important to you— that something about them really resonates with you? Well, that’s how it feels to watch Fleabag. At first, I was drawn in by the witty, morally ambivalent, vulgar leading lady and her hilariously dry analysis of hook-up culture, and her almost constant breaking of the fourth wall— but slowly I became enthralled in Fleabag’s exploration of love, guilt, intense female rage, and being a woman in our world— or a person at all.

But, before I continue! #Spoileralert!

Fleabag is a dark comedy, but not just for the sake of being pessimistic and funny. The genre is reflective of Fleabag herself— she hides how she truly feels from the audience and from the other characters in the show with raunchy candidness about her sex life. Fleabag entertains us with an amusingly frank analysis of sex, gross men, her distant father, and evil godmother. She makes us laugh most during the darkest parts of her story. But her humor ultimately exists to deter others from discovering the darkness in her: the guilt she feels for the death of her best friend, how scared she is for her sister and her father, and the fear and dread she feels in a world that is indifferent to her. The first season of Fleabag is so clever to me because of the existentially nihilistic philosophy of the show, and the way it manifests in our heroine as emotionless hedonism. I mean, what better way to detach oneself from a growing sense of dread than bountiful amounts of casual sex with strangers?

Fleabag is fixated on sex because it’s the only thing that makes her feel valuable in a world where it increasingly seems that she is not. In the second episode of the show, she pretentiously confesses with a condescending smirk that she fears “losing the currency of youth.” But it’s true— she finds herself digestible only to the degree that she is deemed “fuckable.” The first season ends with a truly honest moment with our heroine, just after we learn a large secret that I will not name in case anybody who hasn’t watched the show has carelessly disregarded my spoiler alert. All you need to know is: this secret is something she feels very guilty about. And she has been hiding it from us (the audience, who she speaks to directly, very often) for the whole show. This final scene of season one is the first time in the show that Fleabag has an entire conversation without making any remarks into the camera. She says:

"I know that my body as it is now really is the only thing I have left, and when that gets old and unfuckable, I may as well just kill it... And somehow there isn’t anything worse than someone who doesn’t want to fuck me... Either everyone feels like this a little bit, and they’re just not talking about it, or I am completely fucking alone. Which isn’t fucking funny."

I love this moment because any viewer who is looking for something to laugh is told that it is definitely not funny. This is the first moment in the show that has no twinge of humor, no eye rolls or snide remarks into the camera— just an honest declaration. It’s telling that Fleabag ignores the camera in this moment because she is disregarding this coping mechanism. And it’s important that this happens when she is talking about her guilt, and how she feels worthless in every way but her capacity to seduce people (something, I think, many women can relate to.)

This brings me to the Priest-Fleabag relationship in the second season. I have so many thoughts about the Priest-Fleabag relationship, but what interests me most is how the Priest challenges this fear of worthlessness Fleabag has, and the examination of guilt it brings. The show poses the question: what do we do with our guilt? Where do we put it? The Priest knows exactly what to do with his (Catholics are kind of pros at this): confess, and ask God for forgiveness. For him, as long as he’s good with god— he’s in the clear. But it’s not so clear for Fleabag. I mean, when she does try out confession, it doesn’t turn out so well. So, how is she to make sense of the guilt she feels in a meaningless, godless world? Is there anything to do but... let it pass?

I think that Fleabag experiences love in a similar way. At one point, in a flashback to a conversation about the death of her mother, Fleabag says, “I don’t know what to do with it... with all the love I have for her. I don’t know where to put it now.” For Fleabag, the love she feels weighs on her— so Boo, (her now-dead best friend) offers to take it.  She says, “it sounds lovely. I’ll have it.”

For Fleabag, love and guilt are all mixed up and intertwined with each other. It’s unclear which is driving her to the Priest— her love for him, or her search for forgiveness? I think part of the reason Fleabag is interested in the Priest is because he feels something like forgiveness to her. He’s supposed to be this figure of god, and he can see through her—literally, he’s the only person who senses when she breaks the fourth wall— and he still wants to be around her. This is important for Fleabag. She’s very concerned with his piety, and I think this is not just because it’s what is keeping him from hooking up with her— but also because she feels some amount of validation from being befriended by a Priest. It’s clear she’s attracted to him, but the show makes us wonder: what else will Fleabag get out of seducing this Priest?

Of course, they do end up hooking up, because it’s the only way Fleabag knows how to feel valued. But the Priest challenges this. Fleabag’s coping mechanism for the first half of the show is shallow hook-ups that prove to her that she’s useless, but being loved by the Priest interrupts this coping mechanism— it threatens her belief that she is worthless.

The second (and final) season ends with Fleabag confessing her love for the Priest, in a way that mirrors her confession of guilt at the end of the first season. I think we learn with Fleabag that the only thing we can do with our love, and our guilt, is share them with others. Whether the love is reciprocated or not, we can’t keep it inside. The show jumbles the two together in a way that makes them feel almost indistinguishable like her actions are equally out of love and guilt. But we learn from her first confession at the end of the first season, and from her second confession at the end of the second season, that the only way to make it through the pain of love and guilt is to muddle through them together, but of course, with time—

There is a lot more to this show than this, including a really complex relationship between Fleabag and the audience, metaphorical (and real) foxes chasing after the Priest, witty feminist commentary, etc.— so if you haven’t watched it yet, you should!