Shakespeare & Feminism: He’s Not As “Woke” As You Think He Is 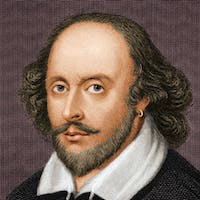 Shakespeare is often praised as a man ahead of his time, producing pieces with subtle, or sometimes even overt, liberal ideology. And while I am not going to try and deny that Shakespeare did have more culturally advanced ideas portrayed through his works (for example, you cannot convince me that Coriolanus is not a deliberate and romantic homoerotic text), I am  going to focusing on feminist critique of Shakespeare's plays.

The Fate of Shakespearean Women

Consider Lady Macbeth from, of course, Macbeth. Lady Macbeth is seen as dominant within her marriage to Macbeth, being portrayed as non-maternal and unloving-- the opposite of what a woman should be. She is responsible for Macbeth’s entrapment and murdering of King Duncan, along with the Weird Sisters’ prediction (whose ugliness makes them seem less like women and more like beasts). Macbeth, on the other hand, while being a powerful warrior in battle, is a coward in his own life as he is submissive to his wife’s demands.

Being that Macbeth is a tragedy, the couple separately meets unsettling ends. For her brain and dominance Lady Macbeth dies by what is suggested as suicide. For his cowardness, Macbeth is caught and punished for his crimes.

Now consider Katherine Minola, the “shrew” from Taming of the Shrew (or Kat from 10 Things I Hate About You if you prefer). Katherine, despite being physically beautiful, is undesirable because of her intelligence, wit and her refusal to submit and become the property of a man. Her sister Bianca, however, is quiet, submissive, and beautiful and therefore desired by many men. The sisters’ father will not allow Bianca to marry until Katherine herself is married, so a plan to “tame the shrew” is derived so that the men can court the lovely Bianca.

Katherine’s “happy” ending is that she is made submissive-- again, as a woman should be-- by her suitor Petruchio (or Patrick Verona in 10 Things I Hate About You). The fire within Katherina is extinguished.

Regardless of how “well-behaved” women are in Shakespeare’s plays, they still do not escape gruesome ends.

Ophelia (Hamlet) is genuine in her care for Hamlet’s wellbeing and submissive to her father’s demands. She dies by being so sad that she drowns.

Desdemona (Othello) is innocent, beautiful and loyal to her husband. She lets her husband strangle her to death because she believes she deserves it (despite not doing anything wrong the entire play).

Juliet (Romeo and Juliet) is young and fiercely loyal to Romeo. She kills herself because Romeo was too sad to wait five more minutes for her to wake.

Cordelia (King Lear) is honest and nurturing. She gets banished by her father for the majority of the play but returns to care for him when he is succumbing to his madness. She is hanged.

The list goes on. Even though many of these examples are tragedies, they do not reflect much of a respect for women on Shakespeare’s end. Even when a woman acts exactly as she should, she rarely is rewarded. Furthermore, female death is often written as a consequence of the male characters’ mistakes, a loss the male protagonist must overcome, or even a way to write out a “flawed” woman character.

We have a history of celebrating white men when they admit to believing in liberal views such as feminism and other basic human decencies.

Oh, you think that everyone should be treated equally? Wow, you’re so brave!

While there is nothing wrong with interpreting Shakespeare’s works through a modern lense, it is important to remember that these texts are not even close to being up to modern standards of progressiveness.

Nevertheless, we must still find the power in these badass, Shakespearian women while still recognizing their faults. Shakespeare, while being a bit more progressive in thought, was not capable of seeing these women in the ways we can now.

Take Lady Macbeth. She may have been aggressive and met a gruesome end but she was strong, knew what she wanted, and went after it. Despite Macbeth being a powerful warrior who slaughtered hundreds on his sword, Lady Macbeth still was able to assert her dominance over him in their marriage.

Take Queen Gertrude, Hamlet’s mother from Hamlet. While getting with her dead husband’s brother is, for lack of a better phrase, a bit icky, she was just prioritizing her happiness and finding love after a great loss. Gertrude may have been ignorant of the plots happening behind her back, but she still deeply cared for the wellbeing of her son and new husband.

Again, just because the original viewers/readers of these plays may have not been able to see the true strength in these women, that does not mean we have to be blind to them as well. We have the power to give these female characters a new life and being able to recognize Shakespeare’s original intent for them is the first step in elevating their purpose and motivations.