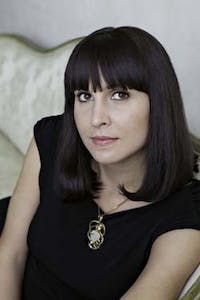 This past month I attended one of the events from the Visting Writers Series at AU hosted by the Creative Writing MFA program. Christa Parravani was featured and spoke about her past memoir, Her, and shared part of the book she is currently writing. She spoke highly of the literature faculty at American and discussed her own experience as a professor at West Virginia University. I had previously read some of Parravani’s work in my LIT-107 Creative Writing class about the death of her twin sister prior to her twin sister’s rape. I already appreciated her style of writing and I learned to love it, even more, when I heard her read aloud.

The excerpt she read from her new book was about her experience with abortion rights in West Virginia. West Virginia is infamously known for its conservative stance on abortion and this sentiment was echoed in Parravani’s experience. Upon discovering she was pregnant with her third child, she attempted to obtain an abortion and was essentially told that this was not possible. Parravani worried about her reputation as both a professor, a writer and a mother of three.  She elegantly intertwined data about healthcare for new and expecting mothers (or lack thereof) in West Virginia with her own experience. The audience was taken aback when she informed us this was her first draft.

Parravani followed her reading by answering questions from students and professors. One of the questions asked how she would explain this book to her infant son whom she tried to abort. She answered by explaining that she was writing this book for her daughters, not her son. She said that she will tell him he is loved but she felt an obligation to write this book in response to the restrictive abortion laws in America. Specifically, she wrote the excerpt she shared in protest to Amendment 1- an amendment in West Virginia further limiting abortion rights although the amendment ended up passing. The author was also asked about our permission to tell certain stories and what it means not to be able to tell a story. She answered that writers must give themselves permission to write their stories because no one else will. She felt that she needed to use her platform to discuss this debilitating issue in America. Although it is a difficult, even uncomfortable, subject to address, Parravani understands that it needs to be spoken about and she is one of the few women who is willing to share her story.

I greatly enjoy Parravani’s work as she speaks from a place of truth. Her article about abortion, called “Life and Death in West Virginia” can be found online at Guernica Magazine’s website. I would highly recommend her memoir as well.