Dermot Kennedy Has a Pretty Way of Keeping the Sound in: a Without Fear Album Review 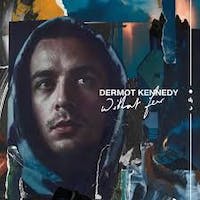 Dermot Kennedy’s latest release is so polished and breathtaking, it’s easy to forget Without Fear is the Irish singer-songwriter’s first album. Although Dermot has emerged with a more heavily-produced sound in contrast to his two earlier EPs and numerous singles, his poetic lyricism remains a centerpiece of each song and is surprisingly well-complimented by a less folksy tone than fans are used to.

The now 27-year-old’s road to success goes back to an era of busking on the streets of Dublin as a teen and has led him to the present where his ongoing fall tour has seen the sellout of impressive venues like Kings Theatre in New York City. While Dermot repeatedly reminds us that artists like Bon Iver, Foy Vance, and Damien Rice have been his long-time inspiration, a love for hip-hop—such as the work of J. Cole, Joey Bada$$, and Drake—is more evident in Without Fear. This makes it difficult for fans to define his genre, but whatever they call it, Dermot makes it work.

The album begins with a mesmerizing rework of an old favorite, “An Evening I Will Not Forget,” which was the artist’s first single to debut on Spotify back in 2015. The new version, however, serves as a contrast to its acoustic counterpart. It begins more confidently, gradually opening up to a beat that reveals hip-hop and electronic undertones. This quality continues into “All My Friends,” another rework which originally debuted on Dermot’s first EP, and runs throughout the majority of Without Fear.

All of Dermot’s fans will recognize “Power Over Me,” his most popularly-accessible radio hit, but will be excited to memorize every word of the newest songs on the album. “What Have I Done” and “Rome” are some of the deeper and more heartfelt of these, the latter boasting gripping lyrics like “Dance carefree, I hope it’s easier knowing me / Now, your soul is yours, but I’ll help it move if I can.” While “Redemption” and “Outgrown”—both brand new—are a bit more upbeat, it would be unfair not to acknowledge their poetic lyrics, as well. “You’ve got a pretty way of keeping the sound out” is quite a memorable example.

For long-time fans who pay attention to Dermot’s unofficial releases via YouTube, “The Corner,” “Dancing Under Red Skies,” and “Without Fear” are nothing new, but the production and studio-recorded clarity give all of them an exciting new sound. These fans might also recognize the melody from “Malay”—a song Dermot began singing on tour in 2018—in the first verse of “Outgrown.” Sadly, however, this leaves uncertainty as to whether “Malay” will ever see a life beyond unreleased versions on YouTube.

There is something to be said for the fact that Without Fear lacks any kind of calm, acoustic ballad largely characterized by the artist’s past discography, especially because until now, the only versions of the title track—“Without Fear”—featured just Dermot and his acoustic guitar. But whether listeners prefer Dermot’s voice classic and stripped-down or with a bit more production, there is no denying that this boy has given us a beautiful view. We look forward to hearing more.