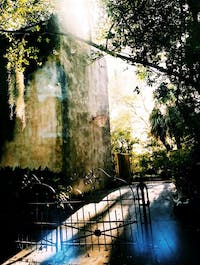 A grey stained plywood dropbox sits atop yellow-lined rusted metal bleachers in the middle of a white wall room. Pick up the pen, attached by cuffed chain links to the side of the box, just next to the entry slot where stories slip into a pile of collective memories. Write a significant moment that occurred around a basketball hoop.

Located right behind Capital One Arena, the National Building Museum quietly calls for appreciation in its smooth red brick stature. Previously known as the headquarters for the United States Pension Bureau, the building can be identified as home to many political affairs, cultural events, and office meetings over the past thirty-two years. Styled after two Roman palaces, the interior atrium design is nothing short of breathtaking with natural skylights illuminating the marble columns and gold detailing. Though the building has served many purposes, it is widely known for housing a variety of art exhibits, alternating every few months to display a wide range of artistry.

While the building itself could be an exploration of imagination and architecture, one simple second-floor exhibit room caught my attention more than any of the intricate archways and precisely placed fountains: HOOP.

“A photograph of someone making a great shot or a great move takes place in a fraction of a second, but an image of that same court taken without people is about a period of time in the layered history of a place. It is about the people who played on that court, who built that community, many of whom have come and gone.”
Bill Bamberger*

Just one fairly small room. White walls. Two, maybe three, photographs per wall. I had no idea what kind of power and reminiscence one small room could hold. As a frequent-flyer to east coast city art museums, I tend to spend my miles quickly and explore at a fast-walk pace, to say the least. This particular room held me grounded, rooted in my own memories and intrigued by the various perspectives captured through color, light, location, and distance. Some familiar, others foreign, the photographs showcase basketball hoops and courts across the world with no human activity to be found. Barren deserts, tropical islands, no nets, graffitied backboards, every hoop has a different story.

The nature of the exhibit of which grasped my attention and curiosity far beyond expectations was the ability of the photographers to create durable human connection and feelings of humanistic interactions with every place, without portraying any actual people or subjects within the frames beyond the hoop. The brisk breeze and rough grass of my grandparent's backyard in the transitioning months between fall and winter felt as immediate as the portrait in front of me, though the last time I experienced or even saw that worn down, hanging net basketball hoop was before I turned thirteen.

Somehow, no matter where it exists, the ability of a single symbol to grant universal experiences and represent various identities, histories, and personal implications astounds me and comforts me all at once. If you’re looking for a piece of home in downtown, District of Columbia, a stroll through the halls of the National Building Museum could bring a refreshing perspective from a single room.

*Bill Bamberger is a featured photographer and author in Fortune, The New York Times, The Washington Post, and holds exhibits all over the United States featuring topics of modern social and cultural issues.