The Women in the Window Review 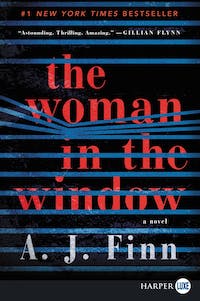 The Woman in the Window by A.J. Finn is a New York Times Bestseller, Stephen King-approved thriller that is soon to be a major motion picture. So… why didn't I enjoy it that much?

I have a problem: every time I go to Barnes & Noble I buy a book. It does matter how close I am to a used-book store, how much cheaper I know it is online or even as a paperback, or how many books I own that I have not read yet. I will always buy books.

The Woman in the Window is written from the perspective of Anna Fox, a woman with agoraphobia who spends her days spying on her neighbors. The drama stems from the Russells move in across the street and what Anna discovers during her voyeurism.

What originally attracted me to this novel was the promise of an unreliable narrator. I love reading books that bend your sense of reality. Also, if the Stephen King said it was worth a read, then who was I to deny myself the opportunity.

Yet, when I finally finished reading the novel, I was left unsatisfied like I had been tricked somehow. With each twist and turn my reactions stayed stagnant.

There are two reasons I believe this book left me unsatisfied.

In the times there was supposedly suspense, I felt no great sense of uneasiness. While I was paying careful attention to detail just in case, I felt as if nothing was really happening or encouraging me to continue reading. In fact, when there was a sense of uneasiness from occasions of dramatic irony- when we the readers can infer something the characters can not- I just felt sad, as if I was experiencing Anna’s own emotions and frustrations. I can say that I felt sympathy and sadness throughout the whole time I was reading the novel.

Additionally, there were several “twists” in this novel. The change from “suspense” to a dramatic twist was, while still containing interesting content, not very shocking and did not really make me question the novel and what Anna had portrayed. To me, these smaller twists made sense. It was as if Finn was expecting me to question reality when it seemed very straightforward. When the bigger twist came, I was expecting it because I knew something had to happen and had somewhat of an idea of what that something was. The actual content of the bigger twist did catch me off guard but not in a good way. Because Anna’s perspective painted my reality, along with the fact that she was the only character I truly cared about, the reveal came out of nowhere because I do not feel as if we were really asked to question that specific point.

The ending, because of the twists, felt very rushed like Finn was trying to wrap everything up. It was disorienting in a way it was not intended to be… which could be said about most of the reveals in the novel.

I would like the preface this section by saying that I have nothing against A.J. Finn. Despite my qualms with the novel, the writing was very good and I cannot deny that I was invested in it. The Woman in the Window is a very well-written first novel. However, I do believe this bias caused some of my confusion and issues with the book.

After I had finished reading, I was bewildered. It was when I turned to the back of the book and saw a picture of the author that things began to make sense. A.J. Finn is a man. More specifically, Finn is a man writing from the perspective of a woman. This explains certain parts that left me confused, parts that seemed off, and ideas that only felt half-developed. Finn was unable to truly encapsulate the female experience, especially the parts that would have made this novel more thrilling (and frightening to a female audience). The perpetual cautiousness women have to practice would have definitely made Anna’s story uniquely terrifying, especially when amplified by her paranoia.

It is also important to note that my experience as a woman guided my interpretation of this text. In the end, even though this novel left me frustrated and dissatisfied, if this book sounds interesting to you, please do not hesitate to give it a read.