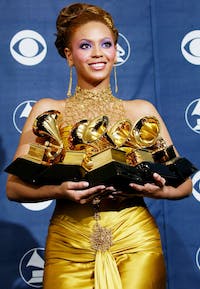 It’s award show season! Red carpets, outfits, and (in theory) the celebration of the art of the past year. The Grammys, like most award shows, have a diversity problem. Critics have hailed this years’ nominees as changing the dynamic of the award show, but frankly; I’ll believe it when I see the winners. It is really important, though, that some really incredible artists and bodies of work were nominated and I (as always) have many opinions. Here is my comprehensive(ish) review of the General Field Grammy nominees (because I simply do not have the energy to go through 84 categories) and who I personally would like to see win.

1. Record Of The Year

I guess this one really depends on how you define record of the year. Old Town Road broke records of longest charting song in Billboard history, spending nearly 20 weeks at #1. So it is, indeed, the Song of the Year based on charts alone. My runners up are Bad Guy and Sunflower, which I also truly enjoyed and are, arguably, better quality songs.

2. Album Of The Year

While I (truly!) thoroughly enjoyed every single album on this list, I have to give it Lizzo. As a diehard Lana fan who thought NFR was incredibly well done, and her best album since Ultraviolence; I must admit that Lizzo absolutely blew up this year, and Cuz I Love You was a tour de force. The way that Lizzo makes people, especially women and people of color, feel is what makes her such a powerful artist. Not only is she talented and empowering, but the album is well crafted and dynamic- certainly album of the year.

Truth Hurts was released in 2017, so why it’s on this list is beyond me. But Emily, you say, it rose to prominence/ “public awareness” (via the Grammy rules) in 2019. To which I would argue that it didn’t, I and many others were jamming out to Truth Hurts in 2018, for which reason I say that the song of the year is Lover. I feel the need to qualify this in a couple of ways. I loved NFR and its titular track, as stated in my album of the year shpiel, I just don’t think that song specifically got big enough to be song of the year. “Doin’ Time”? Maybe. But NFR? No. Lover (the album) deserved to be nominated for album of the year, but since it isn’t, I’ll settle for Lover (the song) as song of the year. It’s an instant classic, it’s romantic, it’s sweet, and it’s a new era for Taylor. It’s nice to see the girl happy, okay?

Even though Maggie Rogers has been out here since the famous Alaska/Pharell incident and the video came out, her debut album “Heard it in a Past Life” came out this year. She has really been getting the recognition she deserves for her solid indie pop discography in 2019 and I really can’t wait to see where she goes next. Honorable mention goes to Rosalía who really did break into the mainstream this year. “Barefoot in the Park” with James Blake was one of my favorite collaborations of 2019. I also think it’s interesting that Lizzo is in this category, when she’s been working in the industry for over 10 years now- something to think about.

All in all, this should be a really interesting year for the Grammys. I’m excited to see who wins! If you want to watch the show, it’s airing on January 26th on CBS at 8pm ET.