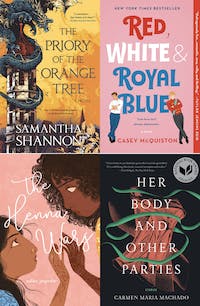 When entering the realm of LGBTQ literature it’s easy for readers to find ourselves within the same trap that we often do: being left with or gravitating to narratives centered around white, male stories. Lists of LGBTQ book recommendations often parrot the same titles, ignoring a large swath of literature out there addressing queer women, transgender people, and persons of color. Even in a community that prides itself on its “diversity”, LGBTQ stories are dominated by the same group that governs mainstream literature canon. That’s why I’ll be taking this post to highlight a few novels that venture beyond the stories we’re frequently told. By no means is this list comprehensive, but hopefully it will turn both LGBTQ and allies of the community onto a new range of reads.

1. The Priory of the Orange Tree by Samantha Shannon

I admit myself to be biased on this choice, as it ranks as one of my overall favorite books. That being said, Priory of the Orange Tree provides an intricate narrative with its worldbuilding finding a basis in European, Middle Eastern, and Eastern Asian culture, geography, and legend. Priding itself as being a “feminist retelling of Saint George and the Dragon", the book largely focuses on its multiple female protagonists. A split narrative book, Priory finds itself mainly divided between the voices of Ead, a spy in the European-esque House of Berethnet dedicated to protecting the life of its queen in the case of her connection to a century-old legend, and Tane, a dragon rider seas away. Ead can be securely noted as the main protagonist of the story, placing a lesbian of color at the forefront of the story. Other characters are focused on, including a gay man, bisexual woman, and multiple characters of color. While the story is one of fantasy, legend, and political intrigue, sapphic romance plays a large role in its complex narrative.

Red, White, & Royal Blue focuses on the antagonistic, then friendly, then romantic relationship of the son of the president and heir to the royal throne. Even though it focuses on male characters and the questionable politics of the two countries, the novel is told through the lens of a mixed-race Latinx character and rightfully critiques the politics it wields. A friendship spurred on by a public fight between the two, the bond between the president’s son Alex Claremont-Diaz and the royal Prince Henry grows genuine. A story tackling homophobia, politics, and race, it is a must-read.

3. The Henna Wars by Adiba Jaigirdar

This YA story focuses on the rivalry between two high school girls in their school’s business competition. Nishat, the story’s Bangladeshi protagonist, decides to do henna work for the competition only for her crush Flavia, who is black and Brazilian, and her white cousin Chyna to appropriate this practice for her own gain. A complex romance handling racism, cultural appropriation, homophobia, familial disapproval, and mixed-race identity, The Henna Wars dares to tackle issues often absent in queer romances, particularly those of the young adult genre. I won’t spoil anything, but the characters all learn and grow in their own way in order to connect with one another and recognize the mistakes and sacrifices they make along the way in order to beat one another.

4. Her Body and Other Parties by Carmen Maria Machado

A set of short stories by author Carmen Maria Machado, every short story presents a narrative with a different female protagonists, many of which involving queer elements. A set of stories that often incorporate magical realism, Machado writes of women struggling in different ways with their patriarchal society. As many of these stories deal with issues of mental health, abuse, and other triggering elements, one may approach it with their own level of comfortability.