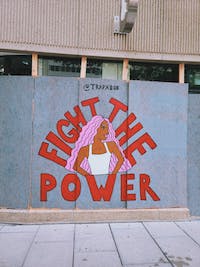 Growing up in Hawai'i––an island some would consider a racial utopia (I certainly wouldn't)––it was rare to have discussions on race and privilege, especially about the Black experience in America. Being in such an isolated location made it feel as if we were immune to the racial inequities and injustices that plagued the "mainland," a term locals use to describe the continental United States. My friends and I would crack lighthearted jokes all the time, such as being "podagee" (Portuguese) for doing something in a foolish or incorrect way.

I distinctly remember the day I heard about the Ferguson protests. I logged onto my Tumblr and the first image that popped up on my dashboard was a silhouette of a man against a burning building. I kept scrolling until I found a caption that explained what happened: a fatal shooting of an 18-year old Black man by a Ferguson police officer. My tears left salty trails down my cheeks as I read testimony after testimony of the injustice that Black people face every day. I wanted to jump on the next flight from Hawai'i to Missouri to rally in the streets and voice my support. I felt so helpless, sitting at my computer desk thousands of miles away.

About a year later, I received a TIME magazine in my mailbox that had in big white font––the kind that you see on billboards or on the front page of the New York Times after a terrorist attack––the words "Black Lives Matter." Underneath the words were two still images, one of Walter Scott running for his life and the other showing a police officer pointing his gun as if he were at target practice. I later found out that these images were taken from a disturbing video that captured Scott's final moments. Nobody should ever have their murder publicized like that. My naive self thought change was going to happen; I mean, there's no way that the deaths of thousands of Black people by the hands of the police would be in vain, right?

People need to start doing more to support the Black community like buy from Black-owned businesses and advocate for racial sensitivity and diversity training at your places of study, worship and work. Not this performative theater B.S. that has proliferated every social media page via a cute, comfortable black square that screams "I did my part, so leave me alone." Although the state of our country is currently grim, these photos are meant to bring light to those who believe all is lost. Because there's much to be hopeful for, like all of the Gen-Zers and millennials I saw on the streets advocating for racial justice.

"Truth is on the side of the oppressed." - Malcolm X