Art as a Powerful Force for Social Change 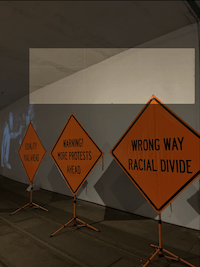 The first time I walked down the ambiguously hidden staircase of Dupont Underground (DU) I discovered a creative world safely tucked away in Dupont Circle’s abandoned trolley station tunnels. Walking down the staircase I did not imagine such a beautiful space to lie right beneath D.C’s iconic Dupont circle. But I guess that’s why it’s iconic. Dupont underground is a representation for D.C. as a whole. Underneath all the political drama, busy people, and suits, lies a world of creatives reflecting and expressing their emotions through beautiful photographs, paintings and designs.

Recently I started volunteering at Dupont Underground, a non-profit community arts organization, located beneath Washington, D.C.’s Dupont Circle. The unique architectural structure was originally opened as a trolley station in 1949 and revived as Dupont Underground in 2016.

Dupont Underground’s mission is to:

“inspire and strengthen creative and thought-provoking dialogue among artists, designers and the community.”

DU’s vision is to:

Dupont Underground highlights the role of art within social activism, especially during this time of racial reckoning encouraged by the Black Lives Matter movement, COVID-19, and the presidential transition.

I spoke with Oliver Clemmons, CEO of Dupont Underground, Nora van Trotsenburg, COO, and Shedrick Pelt, co-curator of the rise up exhibition. (the current exhibition at DU)

First, I spoke with Nora and Oliver about the role of art within a community in a general sense. Art within a community fosters connection, reflection and representation. Nora points out that art can “really communicate things that sometimes people have a really hard time communicating with their worlds...it's able to express the diversity of feelings and perspectives in a way that's sometimes really emotionally charging for people to do in the verbal sense.”

She further elaborates by adding that, “especially with Black Lives Matter, people in the community of color have been feeling exhausted and drained. The art has allowed them to express this without feeling like they are draining themselves.”

The current exhibition at Dupont Underground is “Rise Up” and it features photographs by local photographers, taken of the Black Lives Matter 2020 Uprising in Washington D.C. All of the photographs were taken between May 31st and August 28th and the exhibition was put together within a month after the National Actions Network’s march on Washington. It is currently the only exhibition in D.C. featuring photographs from the protests this past summer. The rise up exhibition is authentic, vulnerable and powerful.

When thinking about the purpose of the Rise Up exhibition, Nora points out that Dupont Underground wanted “to add a reflection of what everyone had just experienced.” The biggest thing she wants people to take away from the exhibition is to know that “they’re not alone in whatever they've experienced whether they’re an ally, whether they’re a person of color who has experienced police brutality, racism and descrimination. It’s just to create a conversation and to create thought and learning.”

When talking to Shedrick Pelt, co-curator of the Rise Up exhibition, I asked him what he wanted people to walk away with after walking through the Rise Up exhibition. He said, “I want it to be an introspective moment, for our allies I want them to look at themselves and know that they have a lot of work still to do and we appreciate what they are to the movement, then also for my people I want them to find some type of pride and inspiration to keep going because the bullshit is not over, these stories that are up on the screen, these are the stories that help you understand that people are out here for us. Also if you’re from D.C., I want you to get some sense of pride that your city is really taking a stance and leading the way in this part of the movement, in this conversation.”

So why are art spaces like Dupont Underground so important right now?

While speaking with Nora and Oliver I concluded that dupont underground draws its strength from bringing in people that are not always featured in big museums so they too can be a part of the conversation and have their voices be heard. A second strength of Dupont Underground is that as compared to other museums, it does not exhibit artifacts and instead exhibits peoples’ voices, their works and allows them to represent themselves.

Nora has a background in native art and art history. She briefly talked to me about how Dupont Underground is able to create more of a safe space so artists are able to express themselves more authentically.

“The Underground, if they were to have an exhibition within the native community, they would be able to exhibit works, create conversations that would not typically happen in a museum. It’s a venue that is fluid, that’s moving, and people bring their works. We essentially facilitate these communities as clients to exhibit their voices, and their works and to represent themselves. And I think that if you have a platform that's like that, you can create more connections with communities because they might feel safer that way.”

Oliver points out that native D.C. citizens “have had this entire city stripped away from them with all the gentrification that has been going on, so what has really been left are the people that have been pushed out of their neighborhoods and have been replaced. D.C. has lost a lot of its culture in the past few years compared to what it was in the 80s, 90s and early 2000s. What we're trying to do is give a voice to these people and artists who still live in the area. A place to showcase their work, to show their culture here in D.C.”

Check out DU's website if you are interested in volunteering, interning, or just want to find out more about the organization!

Also, make sure to check out DU on Instagram (@dupontunderground)