Eggshells & Red Pills: The Matrix as a Trans Allegory 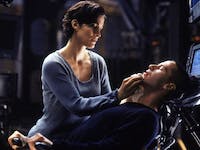 “You ever have the feeling that you’re not sure if you’re awake or still dreaming?”

After a high-paced chase scene, the Wachowskis’ introduce us to their protagonist Neo found sleeping by a computer. Suddenly, the screen starts flashing messages, one of the most iconic being “Follow the White Rabbit,” after which Neo hears a knock on the door.

This scene reminds me of my closeted or “egg” days. This is where I would relentlessly search and try to figure out whether I was indeed transgender. As described by a Vox article, being an egg (closeted) describes a time when “everything is muffled, and the world is hazy and translucent” and that “there is always some barrier between you and reality.” The world, muffled by dissociation and the unknown, remains incomplete.

Therefore, we go searching for the “white rabbit” – a sign, group, or person that will guide us. Neo does eventually find his “white rabbit” in the form of Trinity at the club, who ends up introducing him to the world beyond the Matrix.

Part of a Whole

“One of these lives has a future.
One of them does not.”

Once given the opportunity to find his true self, Neo meets some trouble the next morning in the form of Agent Smith & his cronies. These men, at least to me, represent the doubt and fear in coming to terms with your identity. Whether that be via societal, cultural, or familial pressure, you end up interrogated and feeling alone, like Neo in the interrogation scene.

In this scene, Neo is “deadnamed” as Mr. Thomas Anderson, and told he is to comply with the rules of society, or else. When Neo refuses, he is physically silenced as the script notes, “[Neo] feels his lips grow soft and sticky as they slowly seal shut, melding into each other until all traces of his mouth are gone.” In a terrifying scene, Neo is bugged and tossed home, physically shaken and traumatized as he is unable to tell if anything happened or not.

This entire set of scenes shook me to a point where I had to pause the movie to collect myself before continuing. The interrogation scene is so reminiscent of many coming out stories, including my own. Questioned, and not really listened to much at all.

Morpheus is sitting like a shadow on a chair in the far corner.

MORPHEUS: “No. But if you could, would you really want to?”

After a few scenes, Neo finally meets the fated Morpheus. Morpheus offers Neo the red or blue pill. He takes the red and his “egg” is literally cracked open – physically and mentally. He emerges from the “red rubber cocoon” and is suddenly sent down a chute. After this, he meets the crew again, who helps nurse him back to health as his muscles atrophied while in stasis.

Once healed, Morpheus takes him on a tour of what the Matrix is, and the current reality he lives in. Neo finds it difficult to believe and once out of the simulation proceeds to vomit, and emotionally break, as he too, has a hard time wrapping his head around it.

This is reminiscent of the egg cracking and coming out period. Both processes are physically, emotionally and even spiritually painful, but do become easier over time with the help of others, and eventual self-acceptance via therapy.

“Then you will see that it is not the spoon that bends. It is only yourself.”

Once training begins, and Neo gets to know the crew, Morpheus takes him to the Oracle within the Matrix. There he meets other “Potentials” who are either in various meditative states or levitating objects around the room. The Oracle calls him in and discusses his fate.

This scene reminds me of therapy that a transgender person may have to go through to gain access to surgery and hormones. However, it also contradicts this sequence with the quote, “Know Thyself” in the sense that no one else can determine your transness aside from you. But to know oneself, therapy is always helpful.

Finally, to reference the quote above, as you begin to build yourself and your chosen family, the world begins to change in both positive and negative means around you.

“Human beings are a disease, a cancer of this planet. You are a plague. And we are… the cure.”

Alongside the guides, there are those who discriminate and systematically work against us. The more one embraces trans identity, thus breaking the Matrix, the more people who may come after you. This “ugly” side of humanity shows through Switch’s death and Morpheus’ torture. Switch’s death, and last lines, “not like this” are reminiscent of those we lost too soon. People who the trans community mourns, people who couldn’t live out their lives as who they wanted to be.

Further, Morpheus’ torture relates to conversion therapy. As the agents try to break his mind and spirit, Agent Smith revels in homophobic and transphobic rhetoric, citing humans as a disease, and them to be the “cure.”

This side of the movie shows the hurt and suffering one experiences as an LGBTQIA individual. It is painful to watch these scenes, especially in these times when so many trans and LGBTQIA people are hunted and lynched for being who they are.

“…you’re going to realize just like I did the difference between knowing a path and walking a path.”

Though there are some sad moments, the movie reminds us that we can still live and breathe despite the bondage we were born into. As Morpheus escapes, Neo realizes his true power as “The One” and manages to not only fight but defeat Agent Smith. Through these last few minutes, the movie shows the power we do have in numbers as trans individuals, if we are to accept our true selves and embrace identity.

At the end of the film, Neo leaves a message for the machines, that they do not have to fight, even though Neo will do his best to defeat them. To me, this ending is symbolic to the times we are experiencing right now.

We lost people. People we loved and care for.

And now, it is time to fight back.

The choice is only ours.