Four Dark Academia Style Reads to Get You Through November 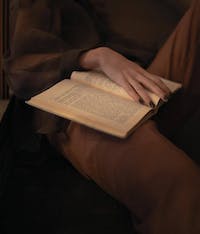 It’s officially November, so that means dark academia season has finally arrived. What is dark academia, you ask? Dark academia is an aesthetic centered on higher education, the arts, romantic longing, and (of course) death. It first gained popularity on blogging sites like Tumblr and can now be found on TikTok as well.

Now that it’s fall, it’s the perfect time to take part in all the creepiness dark academia has to offer. But first, you’re gonna need to get a better idea of what dark academia entails. The best way to do that is to read the books that inspired the wonderful aesthetic. So, here are five dark academia style books to read this fall.

Not only is this novel a prime example of the dark academia aesthetic, but it’s also genuinely really good. The Secret History follows Richard Papen as he transfers to an elite, liberal arts college in New England. Richard quickly becomes friends with his fellow classmates in the exclusive Classics department, and discovers that perhaps their friendship isn’t as wholesome as it seems. This novel features the dark academia style of dress, setting, and of course the creepiness as well. Overall, it’s the perfect introduction to dark academia as a whole.

A Little Life is one of the saddest books I've ever read. In fact, I’d really recommend looking up a list of content warnings before attempting to read this book. That being said, if you tend to enjoy the genre often referred to as “tragedy porn,” this book is for you. A Little Life tells the story of a group of male friends living in New York City. They all experience differing levels of trauma, but it is the trauma of Jude St. Francis that seems to bring them together as a group. The sadness, death, and academia in this novel all seem to make it a part of the dark academia genre. But it’s the strength of the friendship between Jude, Malcolm, Willem, and J.B. that really sets it apart.

I like to call this book the original dark academia novel. Odds are you read this book during your sophomore year of high school. But if you didn’t, I’d highly recommend that you give it a chance now. This book tells the story of best friends Gene and Finny who are attending a New England prep school during the second world war. There is a terrible accident that results in Finny breaking his leg, and Gene finds himself wondering if he’s at fault. Although the author has stated a number of times that he didn’t intend the relationship between Finny and Gene to be homoerotic, high school English classes still continue to analyze their apparently “platonic” love for one another. And, of course, homosexuality just happens to be one of the main themes of dark academic.

This is the first book on the list with a female led story, which should be acknowledged. dark academia is unfortunately a very male heavy genre. It’s also a very white genre, which should also be acknowledged. However, that doesn’t mean it’s impossible to find Dark Academia style books that are a little more inclusive. Carol Goodman’s novel tells the story of Jane Hudson who has returned to teach at the all girls school she went to herself, and was forced to leave after a terrible tragedy. The novel switches from telling the story of Jane’s time at school, and the story of her time in the present as a teacher while the tragedies of her past continue to haunt her.