Harry Styles: Attacking Masculinity, or Showing Us What a Man Can Be? 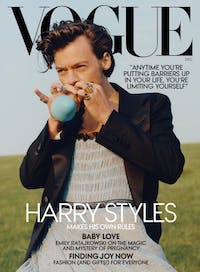 Harry Styles made history in November as the first man to appear solo on Vogue’s cover. He also did it in a dress.

Styles’s cover quickly became a trending topic, with people praising him for breaking gender norms and showing confidence while doing so. Like the famously dedicated fans of One Direction, where Styles got his start, Harry’s fans consider him a heartthrob--and him wearing a dress did not change that one bit.

Toward the end of his One Direction days, Styles began wearing more out-of-the-box clothing for being in a boyband, like floral suits. On his first tour, he wore funky suits and bright colors that some compare to Prince, Elton John, Freddie Mercury, and even David Bowie. Harry is not the first male artist to dress “feminine,” and he won’t be the last, because it works. It shows creativity and boldness, giving these artists an eccentric flair.

While many older people praised Prince, David Bowie, Freddie Mercury, and Elton John for their style choices, they often fail to do the same for Styles and other current artists. It’s not uncommon to hear people call him “gay” just because of the way he dresses. While Styles has never labeled his sexuality, labeling him as gay because of his fashion choices and his music is done to discredit him, which is an act of homophobia. Many also express disdain for his “lack of masculinity” in his fashion choices. This begs the question of how masculinity is defined, and why we have such a problem with people trying to break out of the ideals of masculinity.

Conservative political commentator Candace Owens expressed some of these comments, tweeting that, “There is no society that can survive without strong men. The East knows this. In the west, the steady feminization of our men at the same time that Marxism is being taught to our children is not a coincidence. It is an outright attack. Bring back manly men.”

In my opinion, men dressing feminine does not make them less strong. In fact, having the confidence to deviate from gender norms shows strength, nor does it indicate a rise in Marxism. That claim is simply laughable.

Styles himself even said that there’s strength in this deviation, stating that, “I think there’s so much masculinity in being vulnerable and allowing yourself to be feminine, and I’m very comfortable with that. Growing up you don’t even know what those things mean. You have this idea of what being masculine is and as you grow up and experience more of the world, you become more comfortable with who you are.”

Harry’s expression of femininity shows a degree of boldness and confidence in oneself, not a weakness like Owens claims. Additionally, as a cisgender white man, Styles helped popularize dressing feminine and breaking gender norms. He was not the first to do this.

Aside from the rock stars I mentioned previously, other LGBTQ+ and BIPOC helped to create and pioneer androgynous fashion. In the 1980s, Japanese fashion designers Yohji Yamamoto and Rei Kawakubo began making clothes that challenged gender norms and contributed to avant-garde fashion in Japan. Additionally, Jaden Smith, actor, rapper, and singer modeled for Louis Vuitton’s womenswear campaign in 2016. Within the last ten years, other figures like Billy Porter, Keiynan Lonsdale, Cee-Lo, BTS, and Ryan Jamaal Swain have challenged gender norms with their fashion.

Wearing dresses or skirts or feminine or andorgynous clothing is far from a sign of weakness. Like Styles said, it shows a certain vulnerability, and being vulnerable is one of the strongest, bravest things a person can do.