Why I Can't Stop Reading Humans of New York 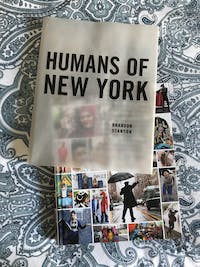 There’s this blog called Humans of New York. You may have heard of it. Self-taught photographer Brandon Stanton created it back in 2010; essentially he walked around New York City stopping random people on the streets, taking their portraits, learning snippets of their stories, and captioning the pictures with their quotes. It started out slow but has since exploded to the tune of 20 million followers. Back in 2013, Stanton bound several hundred of his best photos together in kind of coffee table book of the same name, the first of several.

I own this book. I finally broke down and asked for it after a semester spent squinting at HONY art through the lens of Google Images in the back of my ninth grade journalism class. I still flip through it when I want to decompress, and I find myself making references to it all the time. The table beside my bed is a revolving door of books and notebooks, but the HONY book never leaves.

Why? I’m not sure. But I have some ideas.

“So what inspires you?”

Like the pictured smiling woman with roses in her cotton-candy hair, I too am inspired by colors and beautiful things. The photos themselves give me that. Maybe moreso, though, I’m inspired by things that stand out: clashing things, quietly different things hiding in plain sight, things just weird enough to be obviously real. The guy waiting for the train in an astronaut suit. The widow clad in entirely neon rainbow colors who’d “love to meet someone” but isn’t willing to change anything about herself to do it.

“Yesterday I spoke to my dad for the first time in sixteen years.”

Within these pages, normal and nonsensical sit side by side. The heartwarming, the sad, and the stupidly funny do glorious battle. This fascinates me too- the way a little boy on the subway holding up his teddy bear so it can see out the window can make sense alongside the pink gorilla playing upright bass on the street for cash. The way they all exist together in the same city.

It kinda makes you feel small, but in a good way.

Ever since reading Simon vs. the Homo Sapiens Agenda a few years back, I’ve been a little obsessed with the idea that “people are houses with vast rooms and tiny windows.” Flipping through HONY is like encountering a new house on every page, some that look perfectly familiar, some the likes of which you’ve never seen, and some that completely defy explanation. I’m still trying to figure out what that disgruntled couple in black-tie getup is doing standing in the middle of a lake. Seriously, it’s baffling.

It makes you think, though: every person in this book has a unique, multifaceted life story, and these people are only a tiny fraction of the world. Pretty insane.

And of course, the people.

If it seems overwhelming, that’s because it is. At the same time, though, I’ve flipped through these photos enough that many of the subjects have become familiar faces. Sometimes I find myself imagining backstories for them, or daydreaming book concepts where each one is a character. Just by existing normally in the right place at the right time, they come together to create this absolute explosion of life.

This book is just the beginning- between the website, social media, and three other books, HONY only got better. As 2020 comes to a close, check out this manageable glimpse into the world’s craziness and beauty. You won’t regret it.