Harry Styles and the Resurgence of Effeminate Menswear 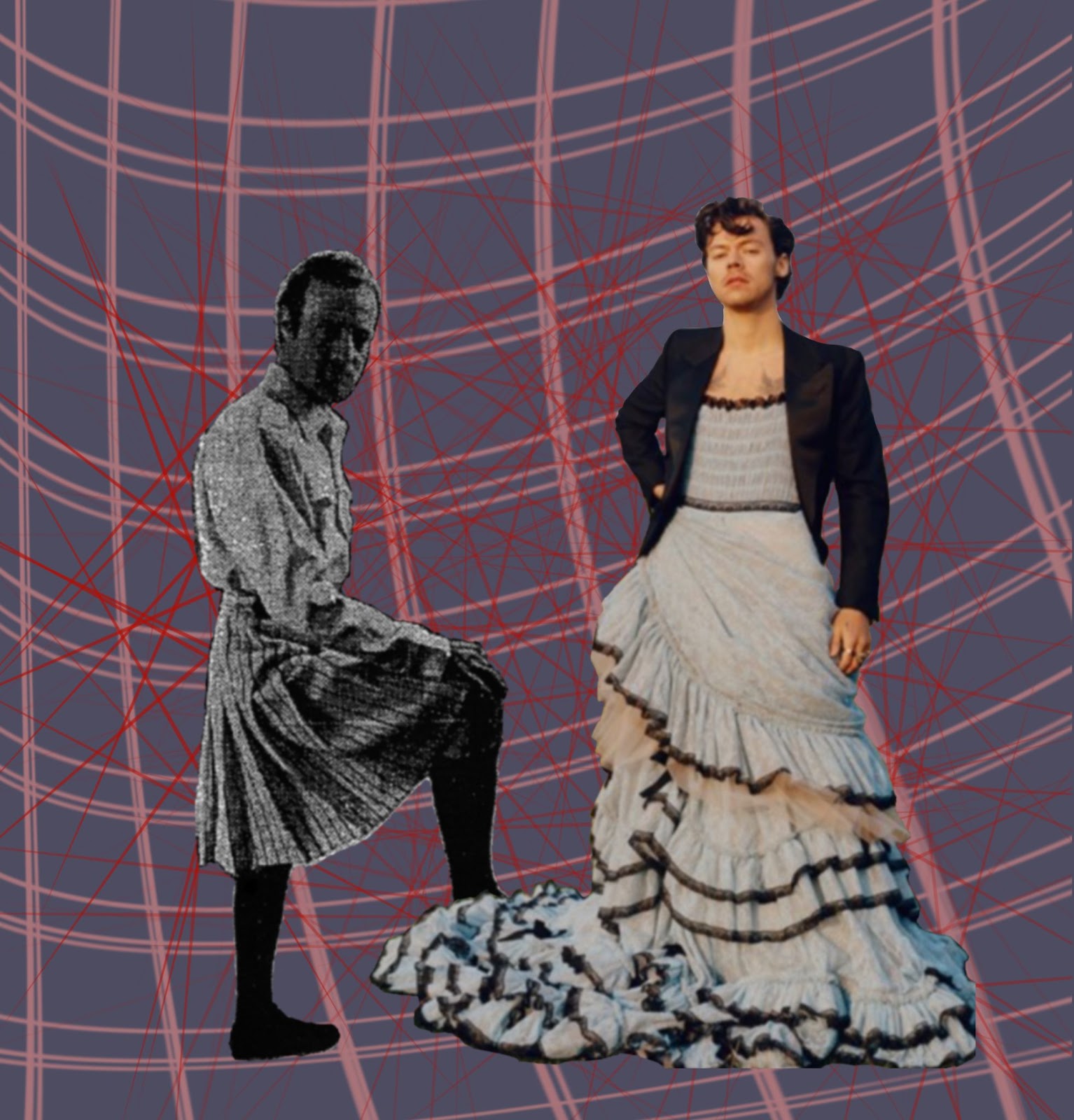 People often view fashion as gendered. They pick and choose their clothes carefully, adorning themselves with accessories, fabrics, and colors to present the gender they identify as. Throughout history, women have worn gowns and men wore tuxedos. Little girls wore ballet flats while their brothers chased each other around in sneakers.

Today, gender and sexuality are as fluid as ever. The World Health Organization defines gender as “the characteristics of women, men, girls and boys that are socially constructed. This includes norms, behaviours and roles associated with being a woman, man, girl or boy, as well as relationships with each other.” Gendered characteristics were forced into boxes that we have only just begun to open, and by breaking these stereotypes we can unearth a new, genderless world of fashion.

While the line between masculine and feminine styles has recently become more blurred, it is not to say that there has been nothing but strictly gendered clothing up until now. During the 1960s, the designer Elizabeth Hawes attempted to revolutionize the rules of fashion by introducing skirts for men. An article written by Jennie Woodard in 2017 looks back on Hawes’ work and explores how she fought to oppose gender norms with clothing.

“Hawes believed that men needed to be freed from the constraints of bulky woolen trousers and allowed to wear skirts…She aimed to design clothes that would achieve a unisex aesthetic and showcase fluid designs sanctioning free movement, symbolizing the emancipation of both sexes from the rigidity of traditional masculine and femininity,” writes Woodard.

In 1967, Hawes’ skirts for men were featured at an exhibition from the Fashion Institute of Technology, and received both immense praise and criticism. Some predicted that the trend would surely catch on within the decade. In fact, little evidence of the movement even exists beyond the exhibition and a handful of letters to the designer, like one from Marvin Killinger, who “did not believe men could change for fear of losing masculinity.”

Hawes devoted her life to social justice activism, specifically feminism, gender equality, and LGBTQ+ rights. Beyond her work at the exhibition, she demonstrated “an abject distaste for the structural power inherent within gender boundaries…[and questioned] why a person’s clothing choices were dependent upon a feminine or masculine identity.” Through her work as a designer and author, Hawes questioned the principles of fashion, arriving at the conclusion that the purpose of strictly masculine clothing “was to stamp out unwanted homosexuality and maintain the man’s status as breadwinner.”

Let’s fast forward a few decades. In December 2019, Harry Styles made fashion history as the first man to appear solo on the cover of Vogue. In a baby blue Gucci ball gown and a blazer to match, Styles broke both the internet and the fashion rulebook. His outfit received attention from fans and critics alike. In a conversation with Vogue, Styles spoke about his fashion evolution:

“Clothes are there to have fun with and experiment with and play with. What’s really exciting is that all of these lines are just kind of crumbling away. When you take away ‘There’s clothes for men and there’s clothes for women,’ once you remove any barriers, obviously you open up the arena in which you can play. I’ll go in shops sometimes, and I just find myself looking at the women’s clothes thinking they’re amazing. It’s like anything—anytime you’re putting barriers up in your own life, you’re just limiting yourself. There’s so much joy to be had in playing with clothes.”

Sound familiar? Styles reignited the flame of genderless fashion that Hawes attempted years ago. His willingness to open himself to femininity inspired younger fashionistas to try something different, something not inherently gendered. His fashion choices have been heavily influenced by his stylist, Harry Lambert, the mastermind behind the Vogue cover and many other iconic outfits, whose fashion choices are daring and genderless. When asked about the political motivations behind his work in an interview with GQ, he answered, “I just think playing with gender stereotypes shouldn’t matter. Why should we give a shit what someone wears?”

Not all are as open to effeminate menswear as Lambert, though. In fact, many critics took Styles’ look like a threat to traditional masculinity. Candace Owens, a conservative political commentator and author, tweeted about the photoshoot, stating “There is no society that can survive without strong men. The East knows this. In the west, the steady feminization of our men at the same time that Marxism is being taught to our children is not a coincidence. It is an outright attack. Bring back manly men.” Styles appeared unbothered, and responded by using Owens’ own words against her. “Bring back manly men,” he wrote in an Instagram caption, affirming his manliness with a light blue suit and half-eaten banana. If gender stereotypes are so unstable that they can crumble with one dress, why should we follow them?

So, is the Harry Styles dress a revolution against the gender binary or a new trend in menswear? I think a little bit of both. “‘To me, he’s very modern,’ says [Olivia] Wilde of Styles, ‘and I hope that this brand of confidence as a male that Harry has—truly devoid of any traces of toxic masculinity—is indicative of his generation and therefore the future of the world…It’s pretty powerful and kind of extraordinary to see someone in his position redefining what it can mean to be a man with confidence.’”