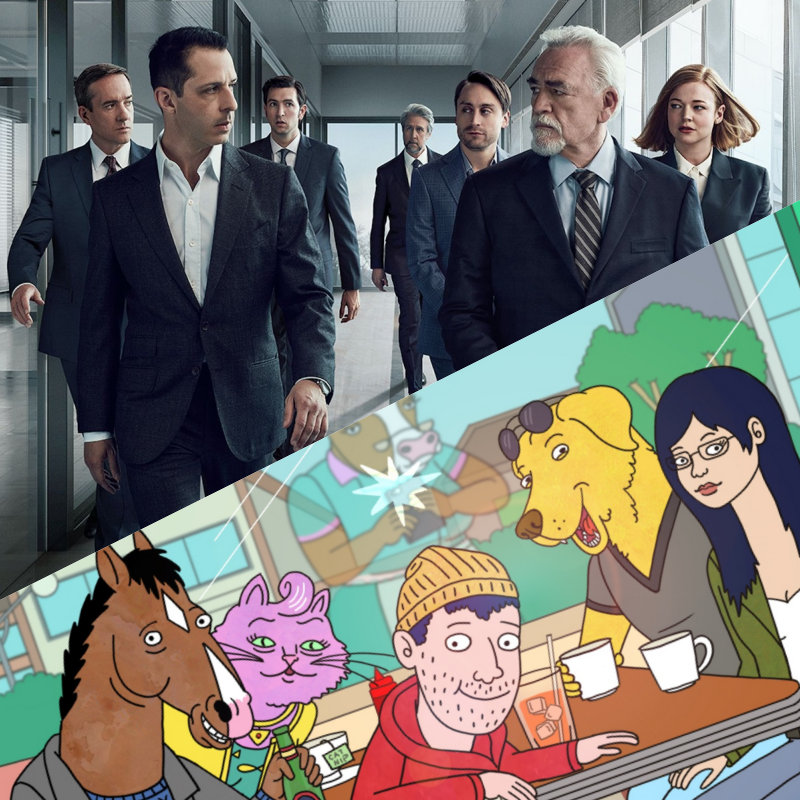 Netflix’s BoJack Horseman is one of my favorite TV shows of all time. A year ago, I convinced my roommate to start watching it. For weeks, watching BoJack was our nightly pastime.

One of my best friends recently convinced a group of us– including my roommate and me– to start watching his favorite TV show of all time: HBO Max’s Succession. For weeks, watching Succession was our nightly pastime.

At first, these seemed like totally distinct experiences. But as the episodes went by, my roommate and I started making some observations. The texts, glances, comments, and conversations between us started to accumulate: This is just like BoJack. This looks like BoJack’s house. This seems like something BoJack would do. Hey, remember that time in BoJack when–

I’m in no way trying to suggest that one show ripped off the other. In most ways, they’re very different, and each is incredible in its own right. That being said, as a fan of both, the comparisons are too tempting: I have to break them down.

Warning: while I did my best to be vague, there will be some spoilers.

On the surface, Succession and BoJack don’t have much in common. The former follows the family owners of a conservative media conglomerate as they battle for the position of next CEO. The latter follows a washed-up former sitcom star as he battles his own demons to preserve his legacy. The former is live-action, with 45-minute episodes and the aesthetic of a Getty Images stock photo. The latter is a cartoon set in a semi-fictional version of Los Angeles where humans and anthropomorphic animals live side-by-side.

Both are dark comedies. That’s about it. Until you examine…

When you boil them down, BoJack and Succession grapple with a lot of the same issues. A major theme in both is the ongoing cycle of parental neglect and abuse. In BoJack, we see this most through BoJack himself, and the myriad of ways his childhood still haunts him. To a lesser extent, we also see this with characters like Princess Carolyn as the show progresses. In Succession, the Roy family patriarch Logan is still very much a part of his children’s lives, so this theme is sometimes even more obvious. Each of the Roy siblings– Kendall, Roman, Shiv, and Connor– were impacted differently by their parents’ mistreatment of them. Their continued struggles with this are important parts of each of their character arcs.

Part of the experience of watching either show is getting a peek into the ugly realities of the industries they center around. In BoJack, the industry in question is Hollywood (aka Hollywoo). In Succession, it’s the media industry and big business in general. The shady dealings and morally questionable decisions that go down in these industries are constant presences in their respective shows.

So are the people behind those questionable decisions. Both Succession and BoJack are set in the world of the rich and famous, and both examine what it means to be there. Big-name actors like BoJack and Mr. Peanutbutter are arguably in the public eye more, but the Roy siblings face similar struggles brought on by their last name, and Waystar Royco itself, as a famous entity, is constantly under fire. They may all have wealth and success, but none of them are truly happy. Most of the time, you can’t help but sympathize with them. 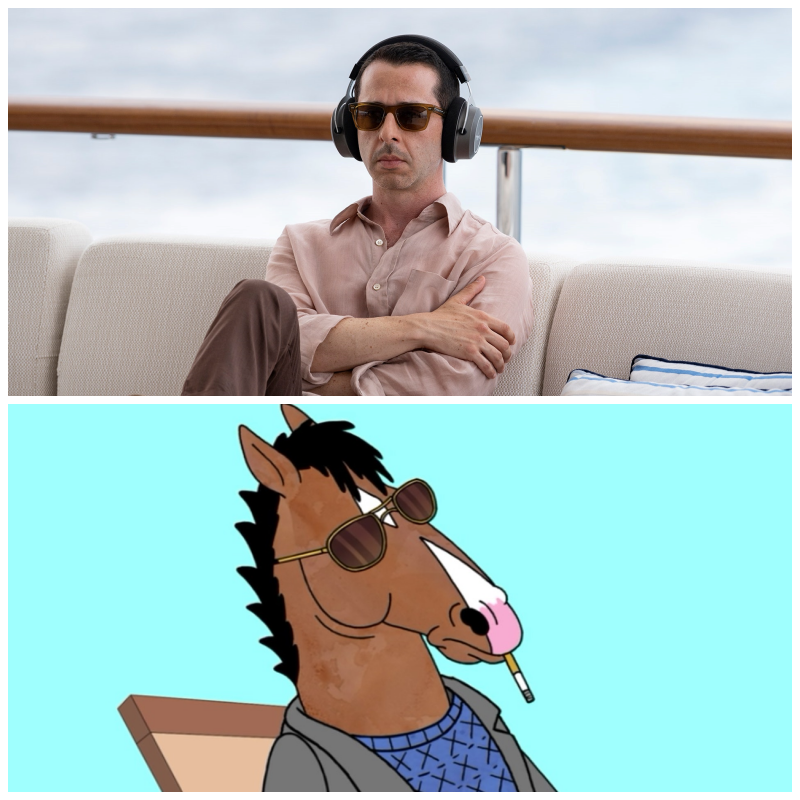 The strongest similarities my roommate and I noticed were between the shows’ main characters. BoJack Horseman and Kendall Roy both attempt to reshape their legacies while battling mental illness and drug addiction. While generally well-meaning, they aren’t always likable; they have problematic histories that come back to haunt them, and they’re often willing to take down others to get what they want. Both eventually come face-to-face with cancel culture because of this. Their love lives are a mess. They struggle not to continue the cycles of abuse they inherited from their parents. Each time you think it’s their rock bottom, a lower low is just around the corner. [Huge spoiler incoming]: Arguably the biggest similarity? Both face major turning points after being semi-responsible for the drug-induced death of a young adult, then covering up their involvement for the sake of their image.

Not every BoJack/Kendall trait is a dark one, though. They share a lot of funny traits too. The cringy performative feminism! The awkward attempts to be cool! The even awkwarder songs they perform (“L to the OG,” anybody? “Do the BoJack”?)! Even Kendall’s mannerisms gave us BoJack vibes sometimes, particularly during the first half of season 3.

Just like the shows, the characters have many important differences too, of course. But c’mon.

The other character parallels:

BoJack and Kendall were the most obvious comparison, but they aren’t the only one.

Roman and Todd have pretty different experiences with sexuality, but given the lack of canon asexual representation out there, it’s hard not to align these two. It’s also hard to not align Todd and Greg: they’re both naive, goofy everymen caught up in the worlds of corrupt famous people.

Shiv and Princess Carolyn stand out as ambitious women trying to climb the ranks in their respective male-dominated industries. Both are badasses who put all their energy into their careers, often at the expense of their personal relationships.

That’s not all: look at Connor and Mr. Peanutbutter. The much-younger girlfriend? The hopeless political campaign with no basis in knowledge or experience? The use of wealth to skate through life without needing qualifications? The general goofiness? I’d say these two would get along.

The use of humor:

Succession actor Jeremy Strong, who plays Kendall, has famously said that he doesn’t see the show as a comedy. Others disagree. While Succession is frequently funny, that humor competes with a predominantly tense plot and morally gray characters that often treat each other horribly. The same is true of BoJack. Its ridiculousness may be a little more overt, but that only makes the contrast bigger when things get dark. Both shows will have you by turns in hysterics and existential despair.

That’s all I’m gonna say: Succession season 3, BoJack season 6, and the pool. If you know, you know.

If any of this sounds good to you, check out either of these fantastic shows! Hopefully, you’ll love them as much as I do.