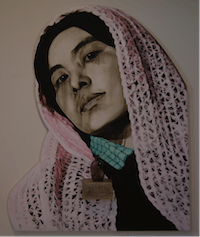 Hung Liu's "Daughter of China, Resident Alien" exhibition at the Katzen Arts Center is a stirring reflection on her history as a Chinese immigrant and explores the history of Chinese immigrants in California during the Gold Rush ― from Resident Alien, the faux green card with Liu's name emblazoned as 'Cookie, Fortune,' to Jiu Jin Shan (Old Gold Mountain), the stark centerpiece, a pile of some two hundred thousand of fortune cookies on top of railroad tracks that is evocative of the thousands of Chinese laborers who participated in America’s boom of transcontinental railroads. Liu’s work spans several different forms of media, from sculptures to paintings to film, and bridges Chinese immigrant life from the 1800’s to the present day.

The haunting exhibit is striking and bold in its imagery, provocative and reminiscent of everything from racist Western propaganda cartoons to historical Chinese photographs to Buddhist philosophy ― like a microcosmic, impetuous, and dynamic gaze on Chinese history, as well as the nexus between her heritage and her immigration to America in the 1940’s . Liu’s paintings mimic the glowing haze that clouds historical photographs, as well as the fog that tends to obscure a mind trying to recollect an eroded, distant past. Often, the meaning behind Liu’s paintings is a “passage of memory into history, while working to uncover the cultural and personal narratives fixed – but often concealed – in the photographic instant” (Hung Liu Biography, 2015).

Jiu Jin Shan (Old Gold Mountain), heaped with fortune cookies, is a cross-section of the life and psyche of 19th century Chinese immigrants following the hiring of 3,000 to link the East and West coasts with the transcontinental railroad during the Gold Rush. Despite suffering mass racism, labor-induced death, and ludicrous identification techniques ― as well as the risk of deportation ― Chinese laborers deemed San Francisco “Old Gold Mountain” as a sanguine symbol of prosperity in their new homes.

Liu draws on her personal history to formulate Daughters of China, based on a propaganda film she saw as a child from 1949 portraying an event where eight Chinese female soldiers drowned themselves instead of surrendering to the opposing army. Clips from a film reflecting the events of the surrender are spliced with trickling water that submerges the subjects.

In Cookie Queen, which depicts a woman creating fortune cookies most likely in a Californian factory during the 19th century, Liu’s affinity for historical photographs is especially prevalent ― especially for candids of subjects steeped in anonymity, like laborers, children, soldiers, and refugees. The stylistic elements of murky ambiguity in aged photography make the paintings seem glazed in the corrosion of decades past.

From dusky paintings of the photographed, shadowed faces of Chinese children to globular portraits portraying the disillusionment Liu indubitably underwent in her journey from East to West, “Daughter of China, Resident Alien” is evocative, entrenching and unforgettable.

The exhibit ran from September 6 through October 23, 2016. All photos are courtesy of the artist.