Activism through poetry with Speak Fresh 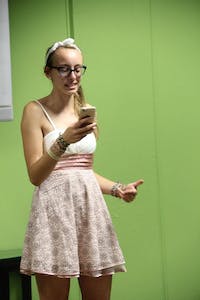 Speak Fresh, the spoken word poetry club at AU, hosted an open mic in Leonard Hall formal lounge on September 26 where almost 20 people gathered. Both members and nonmembers went in front of their peers and a friendly audience to pour their hearts out and deliver impactful performances. Themes touched on why boys compare girls to natural disasters, breakup letters, mental illnesses, racism in America and at AU, and other sensitive topics. At open mics, poets wear their hearts on their sleeves, and bare their souls for all to witness. The beauty of spoken word is that people are openly honest, vulnerable, and human.  Spoken word can also develop connections between the artist and the audience, as people can relate to the words and they can help cope with emotions. More often than not, the best poetry starts with a funny, light story, and ends with a deep, resonating argument about the world.

One poet who executed such a performance, junior Kendall Baron, participated in the open mic. Baron is the president of Speak Fresh, a talented poet, and a hat enthusiast. She spoke to me about the open mic and her expectations for the future of Speak Fresh.

Do you think the open mic on Monday was a success? Why/why not?

It was smaller than previous open mics, and there were some technical difficulties because of this. Some people didn’t stay as long because it was late. We also had to compete with debate parties and midterms that were about to start. However, for the first open mic, I was surprised at the turn out.

Does the club have any more plans for connecting with the student body of AU, especially those who may not know about the club?

Yes, the club needs to push social media, and get T-shirts for advertisement purposes. Effectively communicating interest is the problem. For example, how do you give reminders to people who want to participate to get involved? An open mic once a month is the goal, and the plan for the next one is before Thanksgiving. Then there is an annual slam to decide the Cupsi team. The club also needs to do more fundraising.

(For those who do not know, Cupsi is an annual poetry slam where schools from all over the country compete with individual and/or group poems.)

How did it feel to perform in front of so many people at the open mic on Monday?

It’s funny because you do these intense poems, and everybody jokes about happy poems, but never does them. There’s almost a separation with super personal poems because you become so used to performing them. However, most of the audience was friends or people I knew, which made it a little more nerve wracking. I am more comfortable in front of strangers sometimes.

How did it feel performing new poems?

A little scary, there’s always a fear that people will think I’m crazy or I’ve lost it! But, you just have to write; good poetry is honest and might hurt sometimes.

How did it feel having the freshman who just recently joined the club performing?

Freshmen are like our children, in our eboard group chat we call them ‘our babies.’ It’s interesting because we wonder, “are we even going to have freshmen join this year?!” We want freshmen, because we won’t be here forever, and especially since the eboard will be seniors next year, I don’t want the club to die just because I am busy. I want people who want to take on leadership. It’s also exciting, and I often wonder if the freshmen are going to be better than me! Which is good, because sometimes it’s hard to push yourself to write good pieces without competition.

Do you think poetry club has a way to communicate with the rest of the student body, and do you think it can?

Yes! Poetry is a form activism, although it shouldn’t be the only form. People are able to share personal stories, especially in the communities where minority voices are silenced. Listeners can get contexts for the life they live, although these poets can often represent an entire gender/race. By allowing them to share their stories, you can see poetry connecting to broader things, but listeners should know it doesn’t represent the whole of that community/gender/race. Personal accounts through poetry can definitely reflect broader issues and norms. I also think that poetry can be uncomfortable sometimes, which is good, it might also be better than panel discussions/safe space trainings, because in those, you’re just being taught, but through poetry and expression, I think it’s a little less uncomfortable because it seems more human and less clinical. Political theories without humanity can be scary, but when actual humans are talking about it, it seems more real.

Does the club have any plans for activism through poetry?

We have talked about it! It’s also difficult because we are a small club, so you can’t always have certain events without representation from poets. The people in the club now can’t be the only voices and stories, for those events to work we would need diversity. I want to work with other organizations, and the club is! There is the ‘Say her name’ event, and two poets from Speak Fresh are going to perform poems. We can lend a hand to other events through the club!