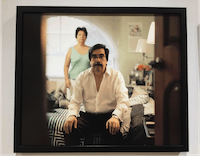 Many of us remember coming out to our families, but we probably don’t have it captured on film and framed for the public like photographer, Paola Paredes.

After being inspired by photographers documenting their own lives as well as coming across a photography book covering lesbian sexuality, Paredes decided not only to come out to her Catholic Ecuadorian family, but to capture the process on film. The result is “Unveiled,” a series of emotional photographs that throw us into Paredes’ milieu, giving us a seat at the table of a pivotal moment in Paredes’ life. It is currently being exhibited at Hillyer Art Space as part of FotoWeek DC.

Paredes says “The results could not be predicted; I understood that from the outset. I had no idea how my parents would react. I knew that their utter rejection was a possibility – a serious risk. And yet, the more I thought about the potential of the project and the more ideas I had for it, the more willing I grew to take that chance.” This uncertainty with serious consequences comes across in the photographs slowly, as well look to the reactions on that parents’ faces during the conversation, wondering how it will turn out. This take is a very natural coming out, when many portray a dichotomy between parental joyous acceptance and brut rejection, Paredes’ story rather shows the reactions as unclear and thoughtful.

Paredes’ coming-out was meticulously planned. In order to capture the most natural reactions during the sit-down “unveiling,” Paredes spent several weeks getting her parents accustomed to the presence of a camera by shooting them doing everyday activities like shaving and smoking. In this preparatory time, she explored barrier of intimacy in her family, photographing her parents in vulnerable settings, but recognizing the areas that are better left unprobed.

One photograph captures her parents in their bedroom through the door. With a literal door open and Paredes looking in on her parents, we get a feel for where Paredes stands with her parents, and where she hopes to go. She pokes at privacy, gaining some admission into her parents’ lives as she prepares to discuss her own bedroom matters.One wall in the exhibition has three photographs that explore the Paredes family and their connections and lack thereof. First is a shot of three framed photos of all three Paredes sisters as young girls on a table crowded with chachkies. Behind the table is a heart shaped balloon reading “Hugs” and “Xoxo.” The result is an intentional display that gently mocks how the Paredes family interprets and practices “love,” arguing that there’s a superficial element masking the lack of a deep familial connection outside of the picture frames. Along with her family, Paredes is pleading to her Ecuadorian Catholic roots at large for acceptance, seeking harmony between her sexuality and her heritage.

One of my favorite pieces in the show is a photograph of Paredes’ parents on their wedding day, resting on Paredes’ stomach, just above her bellybutton. The placing of the anachronistic photo emphasizes the spot where the umbilical cord between Paredes and her mother was cut, and therefore twists the classical Mother and Child art narrative. She moves this conservative tradition and places it within her own contemporary context, reconnecting her parents and herself but also making clear their differences. Paredes is bare, exposing her skin to her parents, entirely unveiled. This nudity contrasts her parents’ wearing of traditional wedding garb, furthering their differences, but bringing the two together.

The tactic of photographing photographs (as mentioned with the photographs in the home of the three sisters as well as the wedding shot) in the Paredes home allows us an insight into what Paredes’ parents want to display in their home, what they’re proud of, and what their realities are of their own lives. We can tell that this family has never considered any of their daughters, framed neatly and presented to any house guests, not eventually having a wedding photo that looks like theirs to put up in her own home.

To add to the cultural tension, Paredes and her family have to find a common language. The transition from Spanish to English happens seamlessly while walking through the gallery. On the first wall of the exhibition there is a photo of a notebook where Paredes plans what she is going to say to her parents in Spanish. This differs from a page from Paredes’ notebook on the last wall of the exhibition where she plans the actual documentation process in camera angles and lighting, this time in English. Between these two notebook pages is the rest of the exhibition which transcends language barriers and closes the gap between Paredes and her parents.

She hopes that her project, that resulted in acceptance by her parents (they even came to the gallery opening), will inspire others to have the courage to come out too. At the gallery opening of her exhibition at Hillyer Art Space, many got a chance to speak with Paredes and share their own stories, whether ending happily like hers or not. Despite the intimate subject, viewers immediately felt comfortable with Paredes. She even put up a visitor book in her exhibition room for viewers to write their comments and get in touch with her. Paredes says “If ‘Unveiled’ can help even one person come out of the closet, then I would have achieved my goal.”

Hillyer Art Space will hold the exhibition until December 18th.