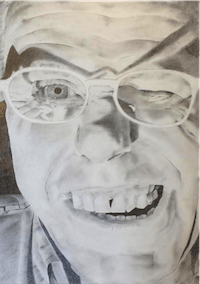 On Thursday morning, I sat down with my friend Jack Tollman. He lives down the hall from me on campus at AU and is originally from London. He is a freshman planning on majoring in Psychology with a minor in Graphic Design, but in his own words, with a laugh and a head shake, he says “it changes every day.” His artwork usually zones in on the individual as a subject, whether they be real people in his life or famous artistic figures. His preferred medium is chalk drawing. Below is a Q&A with a few examples of his work.

“I mean, my least favorite color would probably be green because, well, I don’t know that’s such a tough question!”

We’ll come back to it.

Tell me about your art in general. What media, subjects, etc?

“I usually use chalk, I like to create super-realistic faces with chalk, loads of wrinkles and stuff but then in contrast with a very simplistic background - and then things like adding a color for a window or something, but not much more than that.”

“I’ll take loads of pictures of the person and think about their positioning and hand movements, and think about what background suits them. Like, one time I drew myEenglish teacher with some interesting colors and put him in a classroom.”

Have you ever done self portraits/how have you portrayed yourself?

“I’ve always been very angry at them, I do them in a mirror, and I can’t really find a way to do them that isn’t angry as fuck. I mean, I’ve done doodles of my face in a more abstract way, but apart from that nothing really that weird.”

Who are some artists who you admire and why?

“I think you could say I like people who weather down their art -- decomposed and destroyed in some sense. Giacometti and stuff. Francis Bacon, I like the way they, like, augment the reality of the people and, I don’t know the words. Look at Giacometti’s long sculptures and shit. I saw his really famous sculpture of a weathered dog at the Hirshhorn Museum, and everyone was walking past it, but I just thought ‘wow, this is really amazing’.”

How has your art changed and developed over time?

“I definitely experimented with a lot of stuff. I used to do huge faces, like the size of a wall, and then ripped it all up to paste it back on. It was cool but I think it didn’t really work for some reason.”

You’re in an art class right now. Tell me about that.

“Well, I accidentally signed up for a beginners class. So, the art’s going really well, and I like my teacher, he’s showing me a lot of new techniques that I didn’t know about, like I’m very used to portraiture and he’s having us draw loads of other things which I’m not that used to drawing.”

“Probably is green. I don’t think I own an item of clothing that is green.” (Author’s Note: Jack is currently is wearing grey sweatpants and a navy sweater, and adidas slides. May have just woken up. Not wearing any green, confirmed.)

In the future, Jack plans on continuing his portrait work but wants to get more experimental in his backgrounds and try new techniques in drawing. Some of his work is being published in the upcoming edition of the fall AmLit Magazine, and you can contact him for more information at jacktollman10@googlemail.com.