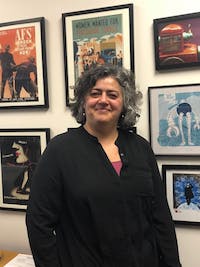 Full of Greek memories, Professor Despina Kakoudaki smiles as she reflects on how her upbringing has influenced her love for literature, film, and teaching.

Kakoudaki, an associate professor of Literature and director of the Humanities Lab in the College of Arts and Sciences, is known for teaching interdisciplinary courses at American University. Students appreciate her for her unique approach to teaching which has led them to develop an interest in topics that they either would not normally want to study or have become further intrigued by due to her passion.

Kakoudaki said she has been teaching since she was 17 and a half, when she taught courses in English as a foreign Language in Greece. This helped pay for her master’s degree. She never imagined herself doing anything but teaching.” I would love to be a martial artist but that is not possible, I do not know that I can be anything else. … It feels very natural to me and it is a place where I feel very natural in myself. It’s very comfortable and it’s a mode that is now as old as I am,” Kakoudaki said.

In the literature department, Kakoudaki teaches courses with post-apocalyptic themes, such as robots and technologies. She is currently teaching a course titled “Frankenstein and Beyond,” where she mixes film and literature texts together to create new avenues in which students can learn to analyze Mary Shelley’s text.

Lina Alam, a senior in the School of International Service, who is currently taking Kakoudaki’s Frankenstein course said, “I think what I like so much about her, that sets her apart from other professors and classes, is her discursive analysis of literature. The connections she can make across time, genre and discipline.”

Aside from the topic of the course, what attracts students to Kakoudaki’s class, is her technique and global perspective.

Lucie Bandouveris, a senior in the College of Arts and Sciences said, “I think her Greek background definitely gives her a different outlook. She approaches robots and mechanics in film from a more global viewpoint, as opposed to centrality in the U.S. Plus, as a fellow Greek, I love that I can compare characters to those of ancient Greek myth and she will understand me off the bat.”

Students describe her technique as loose and inventive while she describes it as discussion-based.

“I do think that in terms of teaching you do have to be honest about what questions you want answers to. I do not ask empty questions, I am aware that it’s something I do on purpose. I am actually interested what the answer might be. It is an active collaboration for me,” Kakoudaki said.

Kakoudaki is also well aware that a lot of students at American are interested in politics rather than literature. However, she conveys literature as being part of humanities.

“There are a lot of creative thinkers and sometimes very interdisciplinary thinkers and even though they may present themselves interested in politics, but what they mean with politics includes questions of culture, gender, cross-cultural understanding or international perspective and a lot of those questions are actually humanities questions. So, under the rubric of politics, I think a lot of humanities questions are lurking and sometimes I use film to get to those other questions,” Kakoudaki said.

She designs her class while keeping in mind that her students have different interests, which in turn leads to interesting discussions.

“Something I especially enjoy about Professor Kakoudaki’s teaching style is its looseness. We always have a topic for each class, for example, but depending on what students want to talk about she can adapt and make students’ personal interests connect back to the matter at hand. She is truly so well-versed in many different disciplines, so I find that it’s easy for her to jump into a variety of directions and run with it,” Alam said.

Jacqueline Bennett, a senior in the College of Arts and Sciences and School of Communication, who is currently taking Kakoudaki’s class recalls an interesting discussion “We had a wonderful discussion after the screening of 'Rocky Horror Picture Show' about the intersection of the artificial body and sexual revolution. During this class, Kakoudaki was able to connect these topics through Judith Butler’s works and really attach these two texts to a larger reading of artificial bodies in culture at large.”

Kakoudaki enjoys seeing her students develop into critical thinkers. “Students write amazing papers but then the semester is over, that is when I want to talk for another month because we have developed a common language,” Kakoudaki said.