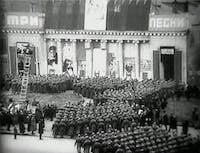 A while ago, I went on a journey back in time to see Lenin’s Russia…at the Russian embassy, that is. Hosted by American University’s Caramel Institute, the event featured documentary filmmaker Dziga Vertov’s Three Songs About Lenin, a film that explores the industrial might and modernization of the Soviet Union and Lenin’s legacy. Released in 1934, the film reflects Soviet admiration of the former leader rather than modern-day Russian sentiment.

While I had been to the Russian Embassy previously, I still felt the odd combination of intimidation and self-importance while the guards examined my ID inside the wrought iron gates. Even though any DC area college student might have attended, you can’t help feeling a little special, particularly when everyone is dressed up for the occasion in suits and sharp black dresses.There was also a social hour with dinner before the film screening. Once in inside the embassy, my classmates and I were met with a spread of traditional Russian food and white cloth table covers. Being vegan, I had to pass on a lot of the foods and the ice cream bar that was to come after the film discussion, but everything looked delicious!

After dinner, everyone filed into the screening room and AU professor Anton Fedyashin gave us an introduction to the film.

The film itself was fantastic! It felt like stepping into another time period and seeing history first-hand. The music was beautiful and I was surprised when the film was not entirely silent, involving some interviews with Russian women workers. The sound quality lapsed at times but overall was well preserved. The film focused on how Lenin’s work aﬀected the quality of life and modernization of the Soviet Union. To emphasize this, there were many shots of industrial might and rolling fields, as well as a shot of a woman reading who moves away from her window to read by a lamp instead, to subtly demonstrate the electrification of rural areas. During the latter half of the film Vertov focused on Lenin’s death and his legacy. I really enjoyed the shots of Lenin and Stalin alive and giving speeches. While I never considered it before, I’d only seen them- and most historical figures- inert in photographs.

The discussion after the film was equally interesting. Some of the questions focused on women’s prominent roles in the film, and I learned that this was intentional on the part of Vertov, who wanted to emphasize women’s roles in improving the Soviet Union and their importance within Communist ideology. Additionally, there was a discussion of how the film was produced and why it was produced in the way that it was. For example, there are multiple versions of it, and all of the originals have been lost. It was also edited multiple times, to not only accommodate both silent and sound viewing, but to cut out people in the film that became politically unfavorable (ie.Trotsky.)

The Caramel Center will host more film screenings later this semester and in the spring, and they also host other cultural events such as music performances. There is no cost for admission, so everyone should consider attending!

Shoot them an email to get on the email list and be notified of future events, and check out the website.