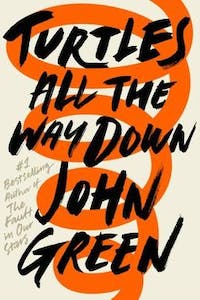 After the smash success of John Green’s previous book and later movie adaptation, The Fault in Our Stars, I was apprehensive as to what to expect of his latest novel: Turtles All The Way Down. However, my uneasiness proved to be futile, as John Green did not disappoint. In fact, by the end of the novel, I found myself forgetting the popularity of Paper Towns and others that had come before, floored by the honesty and raw emotional expression of this new work.

Set in Indianapolis, Turtles All The Way Down centers around 16-year-old Aza Holmes who struggles with severe O.C.D and anxiety that impairs her everyday interactions. Her thoughts of bacteria and being unclean torment her and manifest in reopening, sterilizing, and bandaging a cut on her finger, profusely sweating, fighting the urge to swallow hand sanitizer, and constant hypochondria about contracting the rare clostridium difficile infection. Readers follow Aza and her best friend Daisy, as they investigate the whereabouts of missing billionaire Russell Pickett (who is also the father of Aza'a childhood friend Davis) in hopes of securing the $100,000 reward for his capture. However, what results is much more than a missing person mystery. The novel captures the intricacies of teenage emotion and mental illness as Aza battles to cope with her spiraling thoughts, all the while navigating tumultuous friend/familial relationships and the complex dynamics of her first love.

What impacted me most about the novel was the writing style itself. Through the use of repetition to mirror Aza’s incessant thoughts and the visceral anxiety analogies like the “thought spiral,” we as readers are immediately placed into Aza’s brain, allowing us to empathize with her. Green manages to convey Aza’s emotions to the point of producing physical discomfort in readers (I felt it) — a true feat. He also succeeds in giving voice to mental health conditions that have huge prevalence in our society today, in a way that feels honest and accurate, rather than stereotyped, one dimensional, or false. Perhaps this is due to Green’s personal struggles with anxiety and O.C.D, bringing an element of autobiography to Aza’s struggles. Engaging to the very end and a welcome diversion from Green’s usual comic relief amidst seriousness, Turtles All The Way Down will leave readers uncomfortable, allowing valuable space for thoughtful discussions about mental health.

It's available wherever books are sold, so pick it up ASAP!